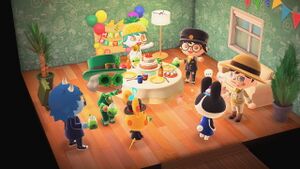 Multiplayer is a feature in the Animal Crossing series that allows multiple players to interact with each other in various forms, the most common being visiting other players' towns.

It has always been possible across the Animal Crossing series to visit other towns, although only since Wild World is it possible to play with another player at the same time as well as visit towns online. At most three players can be invited thus having four be at a town at the same time, although this is expanded in New Horizons with seven invited players. 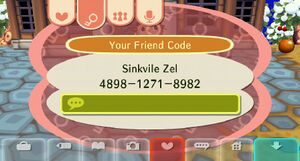 The icon used when registering a Friend Code in City Folk

A Friend Code is a twelve-digit code that identifies any player.

In Wild World and City Folk, a Friend Code can be acquired by talking to Copper and saying "Friend Code!" This will connect to the Nintendo Wi-Fi Connection to assign the player a code. Two players must add each other's Friend Code so that they can be Friends.

In New Leaf onward, Friend Codes and Friends are assigned on a system level.

A player can host their Friends by opening their town's gates and letting visitors in. This can be done by talking to Copper in Wild World and City Folk, Porter in New Leaf, or Orville in New Horizons. Likewise, a player can visit a Friend by talking to these special characters and asking if there are any towns whose gates are opened.

The gates can be closed anytime, ensuring that no more players can enter. If no other players are present when the gates are closed, the multiplayer session is said to have ended 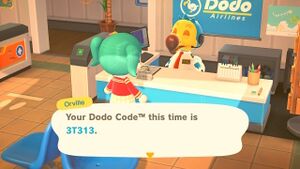 A Dodo Code being issued in New Horizons

In New Horizons, it is no longer required for players to be Friends to visit each other. The player can request for a Dodo Code, a 5-character code that will expire once the multiplayer session ends.

Hosts and visitors can do almost anything in multiplayer mode, although with some exceptions. The host cannot donate to Blathers or access some Town hall services when the multiplayer session is active. Visitors cannot use the lost and found nor the recycle box services, nor they can

In New Horizons, only Best Friends are allowed to use the shovel or axe. 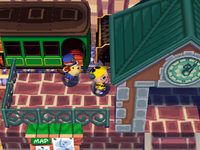 A player arriving at another player's town in Animal Crossing

In Animal Crossing, up to four players can live in a town, with each having their own house.

The player can talk to Porter at the Train Station to visit the town in Memory Card Slot B. Since this must be done on one console, the resident of the town in Slot B cannot play alongside the visitor.

In Wild World and City Folk, if the player talks to Copper at the checkpoint, they can receive a 12-digit Friend Code. If this code is entered into another player's game, they can become friends. Friends can visit each other's towns and send each other letters over the Internet.

Tag Mode (known as Contact Mode in PAL regions), is a mode exclusive to Wild World that allows players to interact wirelessly. While the game is in Tag Mode, coming within range of another person who also has their game in Tag Mode will allow both to swap Notes in Bottles which have been let out to sea, as well as trade constellations and villagers.

A player leaving to visit another town in City Folk

In Wild World and City Folk, the player can talk to Copper at the checkpoint to either visit someone else's town or to open the checkpoint to allow other players into their town by telling him "I wanna go out!" or "Invite guests" respectively. Up to four players can be in a town at one time. Players can chat via an in-game keyboard, or, in City Folk only, via the Wii Speak accessory.

Local Wireless multiplayer is only available in Wild World. After telling Copper "I wanna go out!", the player will be given the option between local and online play. If local is selected the game will search for nearby Nintendo DS systems with their checkpoint open, and, if one is found, the player will visit that town. Up to four players can play in a single town via local wireless, and all players must have a copy of the game.

Like in previous games, up to four players can live in one town. They each have their own house, and only the first player to move in is the mayor. Therefore, other players cannot do mayoral duties such as building Public Works Projects or enacting ordinances. All players can give Bells towards the projects, however.

Friends from the player's Nintendo 3DS Friends List who also have played New Leaf will appear in the player's in-game Friends List. Like in previous games, friends can visit each other's towns over the Internet and send each other letters.

The player can visit the Train Station and talk to Porter to visit other people's towns or open their gate for people to visit.

Up to four players can play in a single town via local wireless. All players must have a copy of the game.

Players can visit friends' towns over the Internet. If Parental Controls are enabled on the Nintendo 3DS, the player will not be able to visit other players' towns online or have online visitors.

Once the Dream Suite is built, the player can share a dream of their town for others to visit over the Internet. The dream acts as a saved state of the player's town at the time of sharing, and it must be updated manually.

The Happy Home Showcase allows players to meet and visit the houses of players that they have met over StreetPass.

Unlike previous games, up to eight players, including the host, can play on a single island, except for local co-op, where only up to four residents, including one leader, can play.

In Animal Crossing: New Horizons, this is the first game where up to eight players can live on one island, and they each have their own house. The first player to arrive on the island becomes the Resident Representative. 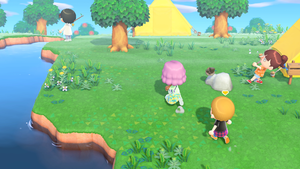 Four players in Local Co-Op in Animal Crossing: New Horizons. The player with the tooltip is designated as the leader.

Local co-op multiplayer is a feature exclusive to New Horizons, such that multiple players of the same island can play on the same console. A player can use the Call Resident app on their NookPhone to call up to three other residents on the island. This will start local co-op mode, where the initial player is assigned the role of "leader" while the others are known as "followers". The Call Resident app will only be unlocked once there is more than one player on the island, and this will be unlocked to all residents.

The leader is able to do several things similar to single player mode. They can access facilities such as the Nook terminal and their NookPhone, talk to other characters, and several others. They can also use Island Designer. Accessing the Call Resident app will allow the leader to view the followers' passports, end the session, change the leader, or close the game entirely. The leader is unable to access Orville's services.

Followers' actions are very limited. They cannot talk to villagers, use chat, enter or exit buildings, and access their inventory or Nookphone. They are able to access tools by pressing X, which will allow them to cycle through their tools but not other handheld items such as the Duster and Pocketbook. Holding a non-tool handheld item as a leader and becoming a follower will cause the player to unequip it. They can use wands, but pressing A will toggle between their default outfit and a random outfit they have. Followers can use reactions but only the eight that they registered as favorites. Any items picked up or caught by a follower will be sent to the recycle box to be picked up later by anyone. A follower who digs something up or catches a critter will "exclaim" the name of that item in a speech bubble.

The leader and followers can move at the same time, but followers are unable to move whenever the leader has certain apps on their NookPhone open, or when they are accessing the chat keyboard or other facilities. Followers who move too far away from the leader will be teleported back near to them.

The leader can be switched by shaking the Joy-Con or Pro Controller, and a follower must press A while standing up to become a leader.

When the leader ends the session, they will be able to play on their own profile, even if they aren't the same player who started local co-op.

Friends from the player's Nintendo Switch Friends List who also have played New Horizons will appear in the player's in-game Friends List. Like in previous games, friends can visit each other's islands over the Internet and send each other letters. A player must at least visit their friend's island or have their friend come to that player's island in order to send letters, they can also mark each other as best friends if conditions have been met and can send messages via the Best Friends app on NookPhone. This also marks the first game where a player's friend cannot modify the island with a Shovel or Axe unless they are registered as Best Friend.

Artwork of the Airport in New Horizons

The player can go to the Airport and talk to Orville to visit other player's towns, open their gate for other players to visit, or receive a Dodo Code.

All players must own a copy of the game. Additionally, the host does not need to mark them as Best Friend in order to modify the island.

Players can visit friends' islands over the Internet, or they can enter a one-time use Dodo Code to visit the island of someone not on their Friends List, including dreams. All methods require a paid Nintendo Switch Online membership.

This page could be improved with the addition of images.
You can help by uploading one or more images and including them on this page.
Retrieved from "https://nookipedia.com/w/index.php?title=User:Decomposer/Sandbox/Multiplayer&oldid=867293"
Category:
Hidden category: