So I guess I should actually create a user page...

My name is kazz and I've been playing Animal Crossing since Animal Crossing: Wild World first sucked me in. I did play Animal Crossing: City Folk but sharing a town with my partner and daughter coupled with the awful grass wear made things a little more... fraught than they really should have been. Animal Crossing: New Leaf was the main reason I got a 3DS and it then failed to materialise for so long that after it finally did come out, despite getting a copy early on, I managed to wrangle the AC 3DS XL as an upgrade for my birthday that year which left me with two towns to play with. I played so much back then! I was endlessly farming for expensive bugs and fish on the island and upgrading stuff and building stuff across both my towns but with my "main" town being the digital copy that had come with my new console. After many months I felt like I had largely completed everything I wanted to barring some seasonal things that were still months away.

While I was waiting I played bunches of other games and one I fell in love with was Fantasy Life, but this was to be my downfall... Now the thing about that was if you have the expansion then you can't play with non-expansion users in the multiplayer and initially while I got both the base game and the expansion my daughter only got the base game. Luckily there was a relatively easy work around whereby you run the game on two different SD cards. Because both the game saves and the expansion data are stored on the SD card, swapping to a new card let you have one version running the expansion and one running the vanilla game. This was awesome! With my frequently swapped SD cards in play I ended up installing some digital titles on both my SD cards and unsurprisingly they functioned like separate copies of the games, which meant... I could have more save files! And that was where it all went a bit wrong. I figured it'd be fun to do the same with Animal Crossing and have a junk town that I could mess around in where I wasn't worried about missing stuff or collecting everything, or even keeping it particularly tidy and I could try out things that I wouldn't want to do in my main towns, sort of a sandbox town, and so I installed the game on my second SD card and it acted like a clean install and I made a new town. It was only when I switched back to my old card that I found that there was a separate check in system memory to make sure you were using an up to date save and my perfect little town was suddenly no longer accessible. I spent a few days googling possible solutions and then finally resigned myself to my town being gone. After that I tried to restart a few times but it was never the same and I couldn't seem to get into it (and so much resentment about all my lost stuff).

I created my current town shortly after the Welcome Amiibo update turned up and even so it's been played in bursts of week or so here and there ever since (which is why despite its age I still haven't managed to move out two of my original villagers who have houses placed in annoying places). Nevertheless, with the switch announcement I figured I should revisit them and finally finish getting them where I wanted them to be before the new game came out and I've been hanging around tweaking stuff and collecting stuff ever since.

At the moment on the wiki I think I'm done with RVs so I'm at a bit of a loose end.
My daughter also recently restarted and I sneak into her town and bury stuff for her to find later whenever I get the chance.
I'm also working on persuading Miranda to leave (it's happening!) so I can finally complete my housing district after which I'll start thinking about what villagers I actually want in there. I finally managed to move Poppy and she's gone to my other town because I just couldn't let her go...
I'm still working on finishing all my alt character's houses, most of which have rooms earmarked for certain series or themes and I'm waiting for specific events/seasons in order to get the bits I want.
Lastly... uhh... I might have slightly splurged and now have a the newly incorporated Junkton, where I can shift things and time travel making it easy for me to pick up any missing bits of info I want for here as well as experiment with certain things without it influencing my actual towns.

Also I'm going to be busy with family/Christmas stuff as well as some other things that will probably stretch into the new year so I'm not sure how active I'll be in the immediate future. 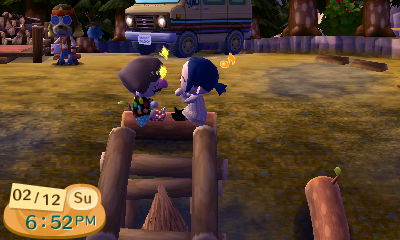