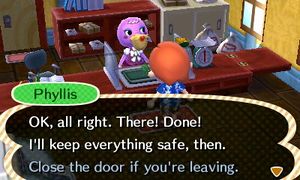 Phyllis muttering in the last line is in Bebebese.

Bebebese is a way animals can speak in all Animal Crossing games. It does not have a vocalization; it instead sounds akin to a typewriter, similar to the dialogue sound effects in many other video games. When a player catches a fish or an insect, finds a fossil, or talks on any other occasion, Bebebese will play, even if other characters are set to speak in Animalese.

Bebebese will sometimes be spoken by villagers, portrayed by faded text (when Animalese is the set spoken language), which signifies muttered or whispered speech. Prime examples of this would be when Phyllis or Redd add extra comments to what they have stated to the player; for example, at the end of a conversation with Phyllis at the Post Office, she will mutter "Quit loitering and shoo!"

The player can choose to have the villagers speak in Bebebese all the time at the phone in the attic or near the start with Rover (or a random villager in Animal Crossing), with Animalese and Silence as alternatives. This option is removed in Animal Crossing: New Leaf.