Happy Home Paradise was announced alongside the 2.0 Free Update in an Animal Crossing: New Horizons Direct on October 15, 2021.[2] The contents of Happy Home Paradise are contained within the 2.0 update, and Happy Home Paradise items are available through trading to players without the paid DLC, but access to the Paradise Planning archipelago is only unlocked once the DLC is purchased. While the free update was released at 10 AM JST (1 AM UTC) on November 4, 2021, 24 hours ahead of its scheduled release date, the Happy Home Paradise content was unlocked at 12 AM local time on November 5, 2021.

The DLC is available for purchase from the Nintendo eShop for US$24.99[nb 2] or as a part of the Nintendo Switch Online + Expansion Pack service for US$49.99[nb 2] per year. Players who own the DLC as part of Nintendo Switch Online + Expansion Pack will lose access to the archipelago if their subscription lapses, but any items obtained from it will remain for usage at their home island.[3] Pre-orders became available on October 29, 2021. 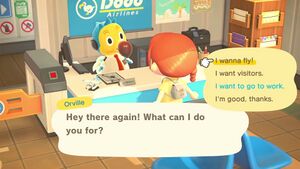 The player also receives a package from Nintendo containing a Paradise Planning photo. 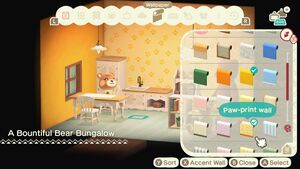 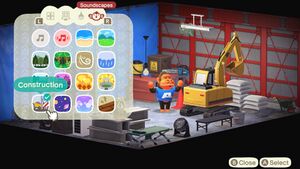 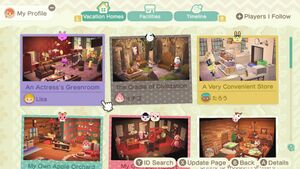 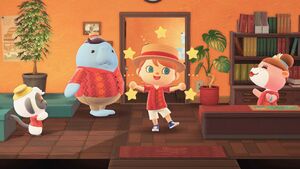 A shop area in the Paradise Planning office sells five exclusive furniture items. The five items that they have change every day, and all are items that can also be found at Nook's Cranny. The player is also able to purchase Souvenir Chocolates, that, when given to a villager on the player's island, can convince the villager receiving to request a vacation home. In addition to that, the player can talk to Wardell to get items not on shop display. 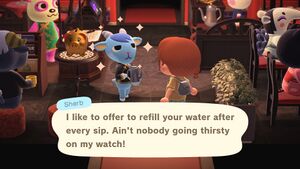 The café is the second facility in order the player has to design for Paradise Planning if chosen over the restaurant. This facility can be built after making 12 vacation homes. If the player has reached the title of Superstar Designer, they can build a second floor, the Gallery. Once this facility is set up, the player can set two characters as Staff of the café. If the player speaks to either of them, they are able to purchase food items using Poki.

The restaurant is the second facility in order the player has to design for Paradise Planning if chosen over the café. This facility can be built after making 12 vacation homes. This facility has two rooms, the Dining Hall and the Kitchen. If the player has completed three roommate requests after the building is finished, they can build a second floor, the Private Room. Once this facility is set up, the player can set one of four villagers to the following roles: Chef, Apprentice, Cashier, and Employee. When talked to, the Chef will give the player a random cooking recipe.

The apparel shop is the final facility in order the player has to design for Paradise Planning. This facility can be built after making 30 vacation homes. Once the facility is set up, the player can set one villager as the Shop Manager and decide to allow any type of clothing, or choose a specific clothing setting of either cute, simple, showy, cool, or loose clothes. The player can buy clothes. 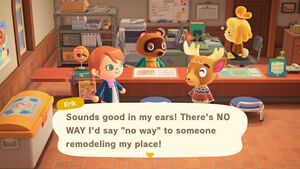 The player can invite villagers from their island to Paradise Planning by giving them souvenir chocolates. Additionally, the houses of the villagers on the player's island can be customized after 30 homes are designed with Paradise Planning and DJ KK makes his visit, and the player can also get Nook Miles the next day, though room-size adjustments will be unavailable for the remodeling of a villager's house. The player can also reset a villager's interior through Isabelle after unlocking the ability to redesign other villager's houses.