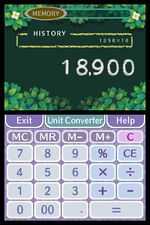 Need to figure out what you owe Tom Nook or the amount in your savings account? Animal Crossing Calculator features the full functionally of a traditional calculator, including a Memory key and the ability to display up to 13 digits, and adds a layer of atmosphere unique to Animal Crossing. Use the Unit Converter to turn one unit of measure into another (such as length, weight, volume, age, and others), or track the history of calculations you've performed with ease. Listen to Animalese pronunciation of numbers when you process them and watch for a favorite Animal Crossing character to appear when your results meet certain criteria. Look no further for a fun, but practical, way to experience the charm of Animal Crossing!

Make maths more fun with this Animal Crossing-themed calculator! Simply use the Touch Screen to enter figures and make calculations, accompanied by classic Animal Crossing visuals and sounds. In addition to a fully-featured calculator, Animal Crossing Calculator also includes a unit converter for converting to and from a variety of different measurements such as weight, length, speed, temperature and more. You can even convert human years to and from animal years!

References to the Animal Crossing series[edit]