amiibo[nb 1] is a line of toys-to-life figures and cards made by Nintendo based on characters from its games. They use near-field communication (NFC) to send and receive information from a game and are used primarily to unlock content or features within games. All console entries in the Animal Crossing series since Animal Crossing: Happy Home Designer have amiibo compatibility.

The first wave of Animal Crossing amiibo figures was released alongside Animal Crossing: amiibo Festival on November 13, 2015 in North America,[nb 2] November 20, 2015 in Europe, and November 21, 2015 in Japan and Australia.[2] It consists of eight figures:

The Isabelle - Winter Outfit and Digby amiibo were bundled with all copies of Animal Crossing: amiibo Festival. In North America, these two figures were initially exclusive to the bundle, but they were eventually released separately on June 10, 2016 and March 18, 2016, respectively.[3][4] In the United States, the Lottie amiibo was initially sold exclusively sold at Target stores, and in Canada, it was initially exclusively sold at Best Buy stores.[1]

The numbered and Welcome amiibo series are sold in blind booster packs, with packs sold in North America containing six cards, and packs sold elsewhere containing three cards. Each pack contains one special character card, with the rest being villagers. After their initial release and discontinuation, Series 1–4 were re-released in November 2020 to promote Animal Crossing: New Horizons.[15]

Series 5 of Animal Crossing amiibo cards consists of 48 cards and was released shortly after the 2.0 for Animal Crossing: New Horizons on November 5, 2021 worldwide.[20]

A special series of six cards for the Sanrio crossover villagers in Welcome amiibo was released shortly after the update on November 3, 2016 in Japan[nb 4] and November 25, 2016 in Europe.[nb 5][24] The Sanrio series was not released in North America until March 26, 2021, shortly after the release of the 1.9.0 for New Horizons.[24]

The Sanrio cards are distributed in different ways in each region:

Five promotional cards were distributed from 2015 to 2016: 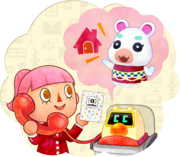 In Animal Crossing: Happy Home Designer, amiibo can be scanned at the amiibo phone in Nook's Homes, which is unlocked after the player designs houses for a few[how many?] clients. Any Series 1–4 card or any Animal Crossing figure can be scanned at the amiibo phone to recruit that character at any time to design a house for. This is the only way to design houses for special characters.

amiibo can also be scanned while in a client's house or facility to invite the character to that location. Villagers can have their clothing and headgear customized, and special characters have a limited selection of clothing that they can be changed between. Invited characters will remain in that location indefinitely unless asked to leave, and a maximum of five characters can exist in a single location at once. Scanning the amiibo again after inviting a character will save all furniture in the room to the amiibo, which can then be scanned in a different copy of the game in order to transfer furniture to other players to help fill their catalog.

Scanning the Super Smash Bros. Villager amiibo figure will unlock a Villager Statue item in the catalog, and scanning the Isabelle amiibo unlocks the Isabelle Scooter item. Scanning these amiibo are the only way to acquire these items for use in the game.

amiibo are required for all game modes in Animal Crossing: amiibo Festival. To play the Board Game, at least one player must scan an Animal Crossing amiibo figure and will play as that character. During the game, any players who used an amiibo must scan it each turn to role the die. After the game is over, the figure can be scanned again to save the earned Happy Points to the amiibo.

Each minigame requires the player to scan one or more amiibo cards to play. The dice values and rock-paper-scissors signs on each card are used in the amiibo Card Battle and Resetti Bop minigames, respectively. amiibo cards with saved houses from Animal Crossing: Happy Home Designer can be scanned during the Board Game to have the saved house appear in the Board Game town.

If the Super Smash Bros. Villager amiibo figure is scanned, a golden statue of the Villager appears in the center of the plaza. 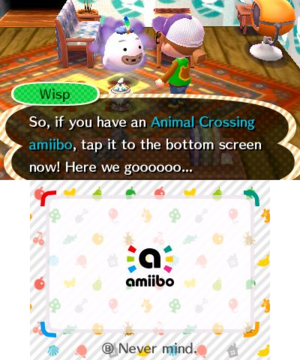 In Animal Crossing: New Leaf - Welcome amiibo, the player must first locate an empty lamp in their town. Once placed in a house the lamp can be interacted with to summon Wisp, who provides access to most amiibo functionality in the game. Villagers can be invited to move into town by scanning their corresponding amiibo card. Special characters (using their figurines only) and villagers from the Welcome amiibo series will instead appear in their RV in the campground when scanned, from which furniture can be purchased in exchange for MEOW Coupons. The villagers can be spoken to and invited to move into town. The Super Smash Bros. Villager amiibo will also invite Wisp himself to the campground.

Other features include the amiibo Camera available on the title screen, which places characters in augmented reality using the 3DS camera. It is compatible with all Animal Crossing series amiibo but not any others, even those that yield crossover villagers with Wisp. However, these villagers and any others can be used in this feature if they are a resident in the player's town. as well as players themselves. Also, in Animal Crossing Puzzle League, each figurine grants a different special ability, and crewmembers can be chosen for Desert Island Escape.

The game is compatible with all Animal Crossing series amiibo figurines and cards from Series 1-4, the Welcome amiibo and Sanrio series, and promotional cards. Series 5 cards will only work if the character had an amiibo card in a prior series. The Super Smash Bros. series Villager and Isabelle figurines are also compatible.

A total of eight unique crossover villagers from other series and six Sanrio-themed villagers are available only by scanning their amiibo and inviting them to move into the player's town:

The Legend of Zelda series[edit]

The following villagers are based on characters and series created by Sanrio and will never move into town unless their card from the limited edition Sanrio series of amiibo is scanned and they are invited to move:

Animal Crossing: New Horizons is compatible with all current Animal Crossing series amiibo. Unlike New Leaf, amiibo from other video game series cannot be used. amiibo have three main functions in New Horizons: spawning characters for photo shoots at Photopia; unlocking their respective posters; and bringing villagers to the campsite with the opportunity to have them move in as residents.

At Photopia, scanning any Animal Crossing series amiibo will unlock the character's respective poster that will be available for purchase in the Nook Shopping Catalog. For characters who appear in New Horizons, scanning their respective amiibo also allows the player to spawn the character as a model for a photo shoot. Models cannot be spoken to, but interacting with them makes them face the player.

These characters from previous Animal Crossing series games cannot be spawned as models, but their corresponding posters may be unlocked:

The following amiibo can only be summoned as models if the update they are introduced to the game with is installed:

Villager amiibo can also be read once per day from the Nook Stop. The scanned villager will appear and speak to the player, during which they may be invited to put up a tent at the town's campsite. When visiting the Campsite, the camper will give the player a DIY recipe for a specific item and ask the player to craft it for them. If the player gives the camper the item, they will thank the player by giving them clothing in return and hint that they would like to be invited again.

From the camper's third consecutive visit, the player may ask the camper to move onto their island as a resident. A camper can only be invited to move in if there is a vacant plot, or a maximum of ten villagers already live on the island. In the latter case the player will be prompted to choose a resident to move out so that the camper may move in.

Scanning an amiibo for a special character (until version 2.0) or a villager already living on the player's island will result in a special dialogue explaining why they can't come. The special characters would have been available to speak with are the same as those that can be invited to Photopia in each update (see above). If the player scans the amiibo for a villager that is in the process of moving in, they will get a special "answering machine" message.

The Roost is added to the museum with the 2.0. An amiibo phone is located on the back wall, it can be used to scan amiibo to make the scanned character visit the café. The scanned character may bring additional characters with them, for example scanning Mable may prompt her to bring Sable and Label along with her. Villagers who previously lived on the player's island will remark their life living there.

amiibo can be scanned in the Animal Crossing: New Horizons – Happy Home Paradise expansion to prompt the scanned character to visit the archipelago, allowing the player to design a vacation home for them. Scanning amiibo is the only way to be able to create designs for certain special characters, such as Isabelle or Timmy and Tommy.

The following games, listed in order of release date, have unique compatibility with Animal Crossing amiibo:

Scanning a compatible amiibo in Taiko no Tatsujin: Atsumete★Tomodachi Daisakusen! will unlock the "New Leaf Medley" and extra content in Kisekae Shoot Mode.

The Villager amiibo can be used in Super Smash Bros. for Nintendo 3DS and Wii U as a customizable fighter, who can be trained up and given alternate moves.

In Kirby: Planet Robobot, scanning different characters' amiibo will give Kirby a Copy Ability relevant to that character or series. All Animal Crossing series give Kirby the Leaf ability, a reference to how a leaf represents furniture in the player's pockets, and the series icon.

In Miitopia, scanning an Isabelle, Tom Nook, K.K. Slider or Mr. Resetti amiibo will unlock a corresponding costume that can be worn by the cast of Mii's in the game.

Animal Crossing series amiibo can be read in WarioWare Gold by using Wario's amiibo Sketch toy in the arcade. Once the amiibo has been read, Wario will paint the corresponding character in his signature style.

In Conga Master Party, a compatible Animal Crossing series amiibo can be read to unlock Animal Crossing-themed costumes for use in the game as well as unlock specific characters.

amiibo on other wikis