"Good evening, <player name>. Have you been admiring the sky? So many shooting stars tonight! Would you care to watch nature's most beautiful performance with me?"
— Celeste, Animal Crossing: New Horizons

Celeste is a red-feathered owl with a pair of pink blurry cheeks, a yellowish-orange beak, and a pair of large, feathered eyebrows with white dots. She possesses a white-colored face with a pair of small black oval eyes with no visible pupils, as well as a white and light-red checkered chest (similar to an argyle sweater). On the sides of her body exist a pair of large wings, which she uses as arms, as well as a pair of yellowish-orange talons with dark-brown stripes and white sharp toenails used as legs. She also has white linings almost reaching to her black hands and tail's end.

Celeste is slightly smaller and shorter than her elder brother; her plumage is burgundy, and she wears a pink bow, which was a gift from Blathers, on the back of her head.

Celeste is sensitive, calm, and quiet, unlike her brother. Her sensitivity shows when she is caught snoozing during the day; she tells the player that unlike Blathers, she does not sleep on the job.

Celeste made her debut in Animal Crossing: Wild World, acting to assist the player in creating constellations and stargazing. Upon talking to her in the observatory, located up the stairs behind Blathers, she will give the player the option to create, delete, or view constellations. The player can also inform Celeste that she is cute, but she thinks the player is teasing her and simply asks them to look through the telescope instead. Celeste will also need to be talked to in order to unlock Blathers's episodes. In Animal Crossing: City Folk, Celeste has the exact same job as in Wild World.

Celeste returns in Animal Crossing: New Leaf where she runs a gift shop on the museum's second floor after it has been built, as stargazing was removed. She sells museum-themed items as well as silver tools. She will even allow the player to open up an exhibition room of their own provided that they pay her a rental fee of 10,000 Bells.

In Animal Crossing: New Horizons, Celeste no longer works at the museum, and instead can be seen on various nights wandering around the island, indicating that a Meteor Shower is occurring sometime that night. It is possible, however, to encounter a meteor shower when she is not visiting, as she visits at most once a week. When talked to for the first time she will inform the player about meteor showers and tell them how to wish when a shooting star falls. She will also give them the Star Wand DIY recipe.

Each new day she is talked to she will give a player a new DIY recipe in a set order, prioritizing zodiac themed ones as long as it is related to the current season. These can also be handed out from her when visiting other player's islands, but a player can only get one from her per day on any island. Recipes are not guaranteed to be the same for all players talking to her on the same day. If the player is not eligible to obtain any additional DIY recipe, she has a 60% chance to give the player five Star Fragments, a 20% chance to give a Large Star Fragment, and a 20% to give a zodiac fragment based on the date that Celeste appears.[1]

If she appears during a meteor shower, she can be seen making wishes when shooting stars fly by. If the player has a zodiac item in their pocket (either an zodiac item from the Stars Series or a star sign fragment), they can show Celeste the item and she will tell a story about mythology based on the item.

Prior to its removal in version 2.0, when the player scans Celeste's amiibo card and tries to invite her, she will say:

Hello, Celeste speaking. Oh, yes, Player, hello! Can I help you with something?
Oh, a visit the campsite?! That sounds delightful! I so love sleeping under sun...
Sadly though, I'm quite busy with my research, and I won't be able to go, Player.
I'm so sorry I can't make it! But thanks awfully for inviting me. 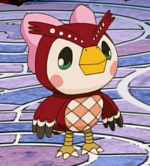 Celeste in Gekijōban Doubutsu no Mori.

Celeste appears in 🎬 Gekijōban Doubutsu no Mori alongside Blathers in the museum where they meet Ai for the first time. She later becomes good friends with Ai.

Celeste appears as a trophy and a sticker in Super Smash Bros. Brawl, and she can appear on the Smashville stage as a spectator.

Celeste makes an appearance as a trophy, and as a background character in both the Smashville and Town and City. 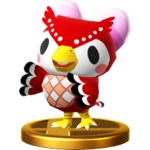 Celeste appears as an unlockable costume in Super Mario Maker.

Celeste appears as a spirit in Super Smash Bros. Ultimate.

In Animal Crossing: Happy Home Designer, Celeste will share a house with Blathers.

Celeste's RV shares its theme with Blathers's, albeit with a different coloration. 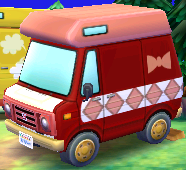 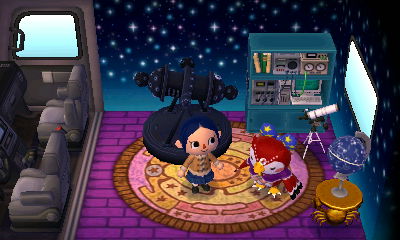 While in her RV, Celeste can say either one of the following dialogues: 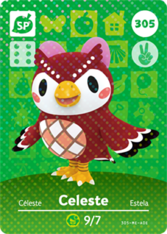 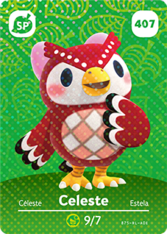 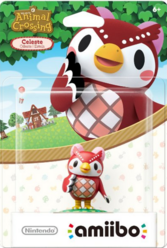