Kaitlin is a cat in the Animal Crossing series who is the mother of Katie. She appears in Animal Crossing: Wild World and Animal Crossing: City Folk, where she can appear in players' towns randomly once they have opened their gate and accepted friends from another town over Wi-Fi.

Kaitlin is a yellow cat with brown bangs, orange-red insides of her ears, an oval-shaped nose, and dark-brown eyes with two eyelashes each. She wears red lipstick and a green apron with a fish on it, and she carries a spatula.

Kaitlin is a caring and loving mother, who likes sticking together with her daughter, Katie. She panics when she is missing her, but once the player helps her find Katie, she then becomes grateful and rewards the player with different kinds/types of presents the following day.

Kaitlin first appears alongside her daughter in Animal Crossing: Wild World, and will tell players that she is missing her daughter, Katie, and believes she may have been left in their friend's town. As a result, she requests the player to open the gate to their town, and their friend will need to find Katie and bring her to the gate of their town and request to visit them. Once they are reunited, the player who had Katie in their town will receive a present. If ignored, Kaitlin will remain in the player's town for a week before disappearing. 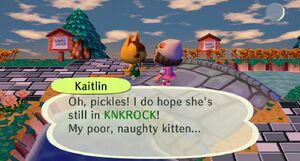 Kaitlin talking with a player in Animal Crossing: City Folk.

Kaitlin returns with Katie in Animal Crossing: City Folk, and her role in this game is unchanged from Wild World. She will still appear in a player's town and ask to find her daughter in a player's friend's town, then send the player a present a day later. Like in Wild World, it is no longer possible to encounter Kaitlin due to the termination of the Nintendo Wi-Fi Connection.

Though Kaitlin does not appear in Animal Crossing: New Horizons, if the player invites Katie to The Roost, she may occasionally reference her in her dialogue.

Kaitlin and Katie in Gekijōban Doubutsu no Mori.

Kaitlin makes a cameo in 🎬 Gekijōban Doubutsu no Mori alongside Katie. The two appear in the audience during the K.K. Slider concert and are later seen outside town hall during the Fireworks Festival.