Alfonso is a lazy alligator villager in the Animal Crossing series who appears in all games to date as well as in 🎬 Gekijōban Doubutsu no Mori. His catchphrase, "it'sa me," is a reference to Mario from the Super Mario franchise. This is further evidence by his default clothing prior to Animal Crossing: New Horizons, the Mario's Tee. His name, which incorporates the first part of "alligator," is Italian, relating to Mario's Italian heritage. The latter part of his Japanese catchphrase, da wani, translates to "crocodile," relating to his species.

In New Horizons, Alfonso has the play hobby and can run around with his arms extended at any time, rather than only outside Resident Services during a scripted activity with a group of villagers.

Artwork of Alfonso from Animal Crossing.

Alfonso is a yellow-orange alligator with a white jaw, cheeks, and stomach. There are darker circles of orange on across his head and body.

As a lazy villager, Alfonso has a relaxed, laid-back lifestyle and will appear friendly toward the player. He often talks about food and is humorous or naïve during conversations. During conversations with other villagers, he generally gets along well with peppy, smug, and cranky villagers, while snooty and jock villagers may not get along with him due to their conflicting lifestyles. In New Horizons, Alfonso goes to sleep at 11 PM and wakes up at 8 AM.

We're friends, so I won't gnaw on your legs, even though I'm starving. 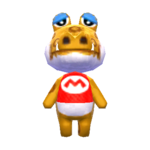 Through City Folk, Alfonso's house has had a fairly consistent interior style that includes furniture from the Exotic Series, Mini Rhythmoids, an Imperial Wall, and either the Basement Floor or Charcoal Tile. Starting with New Leaf, Alfonso's house took on a more playful theme that includes Kiddie Series furniture, a Train Set, and pastel flooring. This playful theming was carried over to New Horizons with Wooden Block furniture and various Child's Room Theme items. 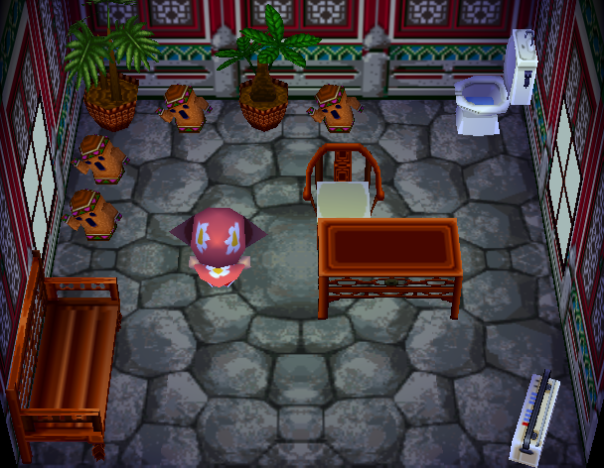 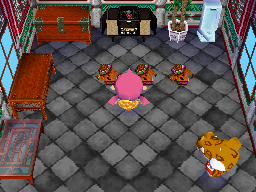 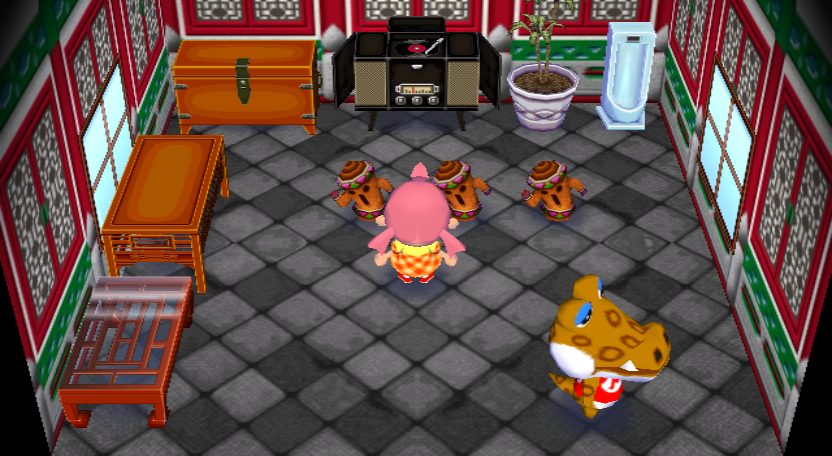 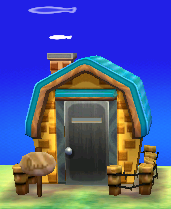 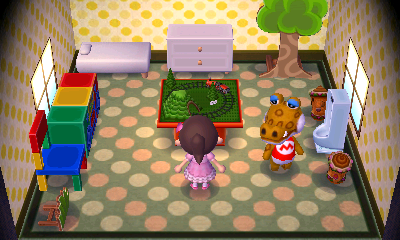 In Animal Crossing: New Horizons, if Alfonso is one of the villagers who moved in during the main storyline after the villager house development quest, his house will have a combination of non-craftable furniture, plus items crafted by players during the island development storyline, primarily from the Log Series and applicable native fruit sets. He cannot have his initial house interior unless he moves out of the player's island or the Happy Home Paradise DLC is purchased, in which either the player or Isabelle can reset the interior. 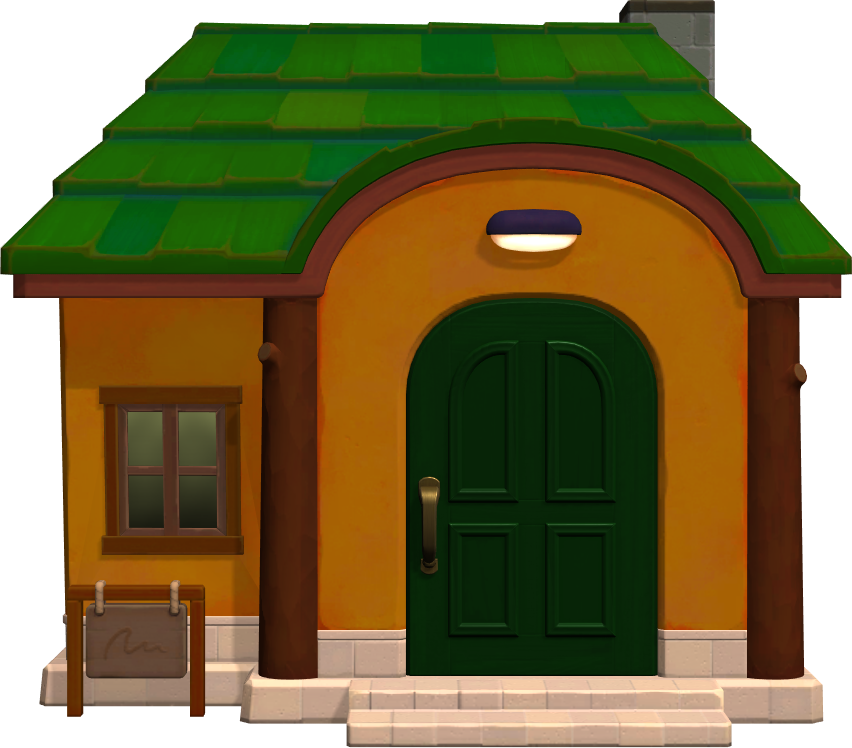 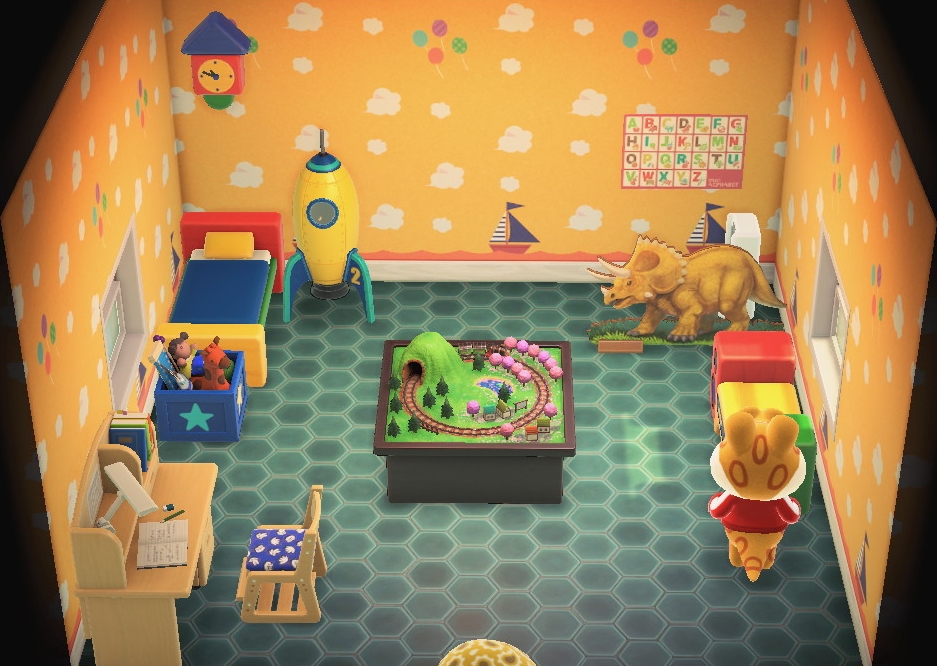 Artwork of Alfonso from Gekijōban Doubutsu no Mori

Alfonso is a major character in 🎬 Gekijōban Doubutsu no Mori, as Yū's best friend. He was voiced by Takatoshi Kaneko.[1]

Alfonso is first seen when Ai delivers 500 pies to him, after which Yū runs by chasing a butterfly to catch it. Alfonso runs back into his house to get his net and follows suit. Later, they dig holes all over the place by the beach to find an ammonite. Rosie says she's seen many more of them somewhere else. Alfonso, Yū, Rosie, Ai, and Margie search for the ammonites in a giant cave.

During the Fireworks Festival, Alfonso is seen with Yū when Crazy Redd sells him a fake golden slingshot. After Margie moves out, Alfonso and Yū play tricks on the villagers with pitfalls, and Ai falls into one, but she just gets up with barely any reaction at all. At the Winter Festival, Albert helps find Gulliver's lost UFO parts.

Alfonso is one of the 40 villagers in Animal Crossing: Pocket Camp who have been in the game since its release. 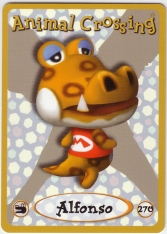 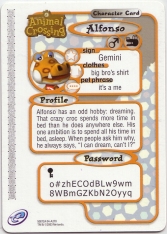 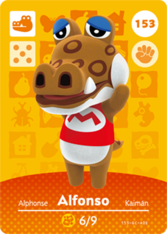