Brewster is a pigeon in the Animal Crossing series who operates The Roost, a café. He first appears in Animal Crossing: Wild World and has appeared in all subsequent games. His name, a real-world surname, is a pun on brew, a slang term for coffee.

Brewster is a dark turquoise pigeon with a yellow beak, pink feet, and a large mustache separated by his beak. He wears a black vest and bowtie, a white apron, and round glasses.

Brewster is reserved, saying little to the player and showing little emotion. One exception to this is if the player opts to let their coffee cool before drinking it; Brewster becomes shocked and ridicules the player for not drinking it hot.

Brewster has a deep voice, similar to that of cranky villagers.

In Animal Crossing: Wild World, Brewster owns The Roost, where he will serve the player a cup of coffee a day for 200 Bells and be present when other special visitors and villagers are in The Roost. He will also be present when K. K. Slider is performing. After buying coffee for a while, he will offer special drinks which may include pigeon milk. At first, Brewster is reserved towards the player, however, he begins to open up towards the player after they have bought coffee for a while.

Artwork of Brewster from City Folk.

In Animal Crossing: New Leaf, Brewster continues to run the The Roost, which can be built as a Public Works Project. When the player sits down, he will offer to brew a cup of coffee for them, allowing them to choose the kind of coffee beans, how much sugar, and how much milk they would like. However, beginning with the player's fourth purchase of coffee, they can choose their usual blend of coffee or they can change the blend. In addition, after purchasing three cups of coffee, the pigeon will begin to allow the player to take their coffee to go. 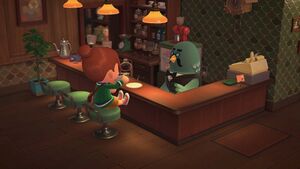 The texture used on the back of K.K. Slider's guitar in New Horizons, featuring Brewster and Dr. Shrunk.

Brewster was added to Animal Crossing: New Horizons in an update released on November 4, 2021, reprising his role as the owner of The Roost. It was revealed in a teaser during the September 23, 2021 Nintendo Direct.[1] Further information on Brewster's role was revealed during the October 15, 2021 New Horizons Direct.[2] In order to build The Roost, the player must talk to Blathers, find Brewster on one of the Gyroid islands during Kapp'n's boat tour, and then return to Blathers to inform him that they found Brewster. The museum will be closed the next day for construction, and once construction is complete, The Roost will be located next to the art exhibit.

Additionally, he makes a cameo on the back of K.K. Slider's guitar, alongside Dr. Shrunk. In the initial release of New Horizons, lazy villagers would sometimes mention Brewster, but this dialogue was removed by version 1.2.0.

Brewster's poster can be obtained from Nook Shopping after inviting him to Photopia via his amiibo.

Brewster in Gekijōban Doubutsu no Mori.

Brewster has a small role in 🎬 Gekijōban Doubutsu no Mori. He first appears when Ai enters The Roost to deliver a package for Apollo and speaks only after Margie moves.

Drink it hot or give it up.

Drink it hot or give it up. 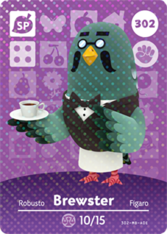