Town and City is set hovering over an Animal Crossing town, but it will travel between the town and the city. When in the town, the stage has three small platforms, and in the city, the stage has two platforms. The time of day will change depending on the system's clock, meaning that depending on the time of day, players may fight the stage in the morning, noon, evening, or at night. Balloons will appear occasionally to drop foods or items.

Several Animal Crossing characters are spectators and will appear to watch the battle. The selection of spectators will change depending on where the stage is. Characters like Brewster, Pelly, and Mabel will only appear in the town, while characters like Gracie and Dr. Shrunk will only appear in the city. K.K. Slider will also appear to perform songs on Saturday nights at 8:00 PM, but he will only be seen in the town section of Town and City 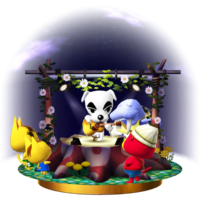 Town and City on other wikis

This page could be improved with the addition of images.
You can help by uploading one or more images and including them on this page.
Retrieved from "https://nookipedia.com/w/index.php?title=Town_and_City&oldid=1086570"
Category:
Hidden category: