Kapp'n is a green turtle[nb 1] in the Animal Crossing series who serves as a driver of various forms of transport. He has been known to row boats, drive taxis, and also drive buses. Kapp'n himself is a sailor at heart, referring frequently to his life on the sea and speaking as a pirate would. He also expresses a fondness for women, cucumbers, and singing old sea shanties.

The word "kappa," from which Kapp'n is derived, is the name for a river yokai (supernatural creature) in Japanese folklore. They are mischievous in nature and reptilian in appearance. His name also plays on how a sailor would pronounce "captain," abbreviating certain sounds so that it becomes a phonetic pronunciation. His name reflects the way he speaks; he talks like a stereotypical pirate, saying things like "yar!", "sprat," and "garr," and he will sometimes refer to the player as a fish or sea creature, such as "scallop," "sea bass," or "urchin."

Artwork of Kapp'n from Animal Crossing.

Kapp'n is a green turtle/kappa with a bald spot surrounded by green triangle hair strands, a big yellow muzzle, a white belly, a red inner mouth, and whitish-green hands and feet. Like his mother, Grams, and daughter, Leila, he has closed eyes with white round rims.

Each game Kapp'n appears in has him wearing different clothes. In Doubutsu no Mori+ and Animal Crossing, he wears a blue vest. His appearance in Wild World, 🎬 Gekijōban Doubutsu no Mori, City Folk, and as an assist trophy in Super Smash Bros. Ultimate depicts him wearing a blue coat, gray pants, black shoes, and a blue and red peaked cap covering his bald spot. In New Leaf, New Horizons, and Pocket Camp, he wears a blue collar shirt with white hibiscus flower patterns with light-blue linings (known in Pocket Camp as the Hibiscus Aloha Shirt) and gray shorts. He also has a pair of red sunglasses hanging from his shirt's pocket. In Happy Home Designer and his RV appearance in Welcome amiibo, he wears a blue vest and brown shorts.

Kapp'n does his various transportation jobs seriously, and has a stereotypical pirate-like accent, a trait he shares with his family.

In the games where he is depicted as a sailor, Kapp'n will sing to the player "Kapp'n's Song", a series of melodies with a variety of lyrics pertaining to his life and family. If the player skips his song in New Leaf and New Horizons, he will express his disappointment at the player.

Artwork of Kapp'n in his boat from Animal Crossing.

In Animal Crossing, he is the ferry operator who rows visitors and the player to the island through the Game Boy Advance cable. During the voyage to the island, he sings a sea shanty, usually about his life on the sea and women.

In Animal Crossing: Wild World, he drives the black taxi to the town and acts as the introducing character responsible for the gender and appearance of the playable character, as well as the name of the town. This is a role he takes on from Rover. He can sometimes be seen in the The Roost drinking coffee. He will talk about his life at sea upon talking to him.

In Animal Crossing: City Folk, he first appears driving the bus to the town, while Rover talks to the playable character determining the gender, birthday, and appearance of the character, as well as the name of the town. He will then appear again driving the bus to the city when going to the bus stop. During the journey to the city, he will talk about women, the city, and modern-day youngsters to male players. If the player is female, he will subtly flirt with them, calling them "cute," "pretty," and that a "manly bus-driver is available." If the player does not respond, he will begin to whistle his sea shanty.

He also appears in The Roost, as he did in Wild World, where he will talk about his life in more detail. 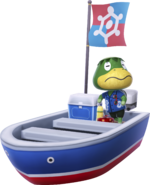 Artwork of Kapp'n in his boat from Animal Crossing: New Leaf.

Kapp'n returns to his roots in Animal Crossing: New Leaf, this time with a motorboat. He will sing and joke to the player on the way to Tortimer's Island and will flirt with female players. Approaching Kapp'n with friends will allow up to four players to travel to an island for local multiplayer gameplay. Once on the island, Kapp'n's wife Leilani, mother Grams, and daughter Leila also make an appearance, running a souvenir shop and providing tours of the island which take the form of minigames.

Kapp'n was added to Animal Crossing: New Horizons in the 2.0 Free Update. Once the player's island reaches a 3-star rating and K.K. Slider plays his first concert, Kapp'n appears in his boat at the island's pier, and he will take the player on a boat tour to a random deserted island for 1,000 Nook Miles. In addition, Kapp'n's poster can be obtained from Nook Shopping after inviting him to Photopia via his amiibo.

Kapp'n appears as a Miiverse stamp in Animal Crossing Plaza.

In Animal Crossing: Happy Home Designer, Kapp'n appears as one of the player's clients, although he allows the player to customize freely without any specific vision.

Kapp'n appears as a playable character in Animal Crossing: amiibo Festival, entering the game if his amiibo character is scanned into the game.

In Animal Crossing: Pocket Camp, Kapp'n has hosted two garden events. He first hosted the Bloomin' Booty with Kapp'n garden event, requesting players to capture ladybugs in exchange for sunflower-themed items. It ran from July 6, 2018 to July 16, 2018. He then hosted the Kapp'n's Summer Resort Vacation garden event, which ran from June 29, 2021 to July 10, 2021.

Kapp'n appears as a minor character in 🎬 Gekijōban Doubutsu no Mori. Near the beginning of the film, he drives Ai to Animal Village in his black taxi, like the one in Animal Crossing: Wild World. He appears later on in the film during the Fireworks Festival, as a member of the audience listening to K.K. Slider singing.

Kapp'n is a collectible trophy in Super Smash Bros. for Nintendo 3DS. He also appears as a background character in the Tortimer Island stage.

Kapp'n appears as an unlockable costume in Super Mario Maker. 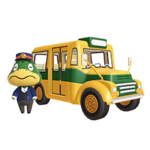 Kapp'n makes a minor appearance as an Assist Trophy in Super Smash Bros. Ultimate, revealed in the August 8th Nintendo Direct, where he will appear with his bus from Animal Crossing: City Folk. Upon being summoned, Kapp'n will get in his bus and drive around the stage, sometimes making the bus jump. Should the bus make contact with a fighter, he will put them in his bus, and drive toward the edge of the screen, KO'ing the fighter in the bus if they don't jump out in time.

In Happy Home Designer, Kapp'n will share a house with Leilani, Leila, and Grams. 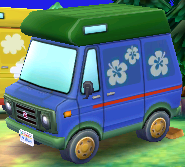 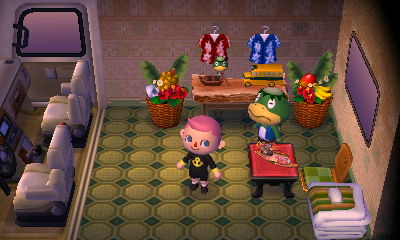 In Happy Home Paradise, Kapp'n will share a house with Leilani, Leila, and Grams. 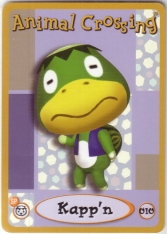 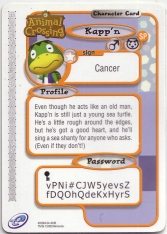 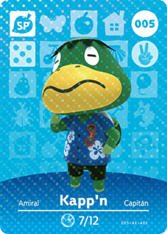 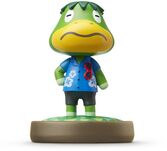 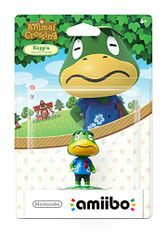