Artwork of Porter from Doubutsu no Mori.

Porter is a brown monkey with a pale yellow face, hands, and feet. He wears a blue station porter uniform, with gold buttons on his jacket and a badge on his hat. He strongly resembles the villager Champ, who appears in Animal Crossing: Wild World and Animal Crossing: City Folk.

As a train station porter, Porter does his job seriously and politely.

Artwork of Porter from Animal Crossing.

Porter first makes his appearance in Doubutsu no Mori, and its GameCube port Animal Crossing. In this game, he is an attendant at the train station, who allows players to visit other towns by speaking with him. The train that passes through town is driven by a monkey who shares an identical appearance with Porter, including the uniform.

After being absent in previous entries, Porter returns as the train station porter in Animal Crossing: New Leaf. He will suggest train station renovations as public works projects when other players visit the town 100 times or more.

Porter's previous role of taking the player to other players' towns is fulfilled by Orville and Wilbur in Animal Crossing: New Horizons, so he was initially absent. Despite this, Porter was added in the 2.0 update, as one of the many characters that can be invited to The Roost. Additionally, Porter's poster can be obtained from Nook Shopping after inviting him to Photopia via his amiibo.

In Super Smash Bros. for Nintendo 3DS, Porter appears as a collectible trophy.

I won't chase those who leave.

I won't chase those who leave. 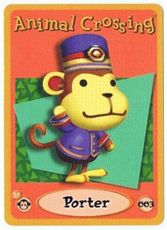 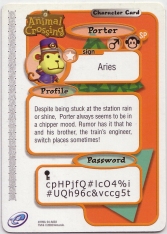 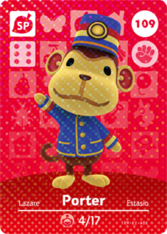