"The time has come! Let's look for eggs! That's my bunny plan! They're here! They're there! They're everywhere! Find them if you can!"
— Zipper, Animal Crossing: New Horizons

Zipper T. Bunny, often shortened to Zipper, is a rabbit in the Animal Crossing series who serves as the host of Bunny Day. He tasks the player with bringing him eggs, and in return, he gives an item from the Egg Series or Bunny Day Series. He is analogous to the Easter Bunny, a folklore symbol of Easter, the holiday Bunny Day is based on.

It is heavily implied through dialogue and character descriptions that Zipper is someone in a rabbit costume due to the zipper on his back, from which his name is derived, though he insists that he is not wearing a costume.

Zipper is what appears to be a yellow rabbit with a cream muzzle, drooping right ear, green eyes, purple eyelids, and red insides of his ears; however, it is implied that it is all a costume. He wears blue denim overalls with heart-shaped buttons and a star stitched in the middle. The overalls have a zipper on the back, visible when the player is speaking to him from above. Zipper also wears a white and green visor. 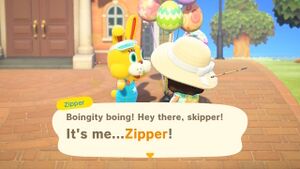 Zipper has a cheery personality when spoken to and dances when the player is near him; however, when the player walks away, he stops dancing and sighs, suggesting that he is putting on a cheery façade for the townsfolk. He also loses his cheery façade when the player speaks to him from above, telling them not to look at his zipper to not "spoil the magic." He also mutters to himself about needing a new job, reference the discomfort in wearing the costume, and in City Folk will even be frustrated about how many Bunny Foils he buried. 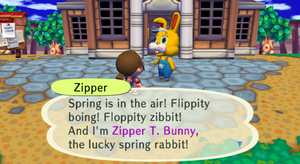 Zipper first appears in Animal Crossing: City Folk. He visits the town on Bunny Day, and he tasks the player with finding eggs buried around town, which can either have candy or a Bunny Foil in them. If the player brings a Bunny Foil to Zipper, he gives them an item from the Egg Series.

When in town, villagers will usually speak of him in a derogatory manner. Normal villagers appear to be scared of him. It would appear that he is unhappy with his choice of uniform and career, as he mentions under his breath how he wants a new career and how uncomfortable he is under the suit.

In Animal Crossing: New Leaf, Zipper appears in town on Bunny Day and now initially asks the player to bring him eggs directly. If the player brings him one of each type of egg found throughout town—Deep-Sea Egg, Earth Egg, Sky Egg, Stone Egg, Tree Egg, and Water Egg—he gives them an Egg Basket. Afterward, the player can bring Zipper a Winning Ticket found within the eggs to receive an item from the Egg Series, or a Grand-Prize Ticket to receive Zipper's Pic.

In the Welcome amiibo update, Zipper can appear at random in his RV at the campground. 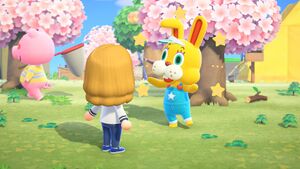 While initially absent from Animal Crossing: New Horizons, Zipper was added in the 1.1.0 First Update and once again hosts Bunny Day. He can be found wandering around the island seven days before Bunny Day (12 days prior to version 1.9.0), and when spoken to, he tasks the player with crafting items from the Bunny Day Series using eggs that he has hidden throughout the island, giving them the DIY recipe for a Bunny Day Bed. Zipper returns on Bunny Day itself at the plaza, where the player can give him one of each type of egg to receive the Bunny Day Basket. If the player crafts every item from the Bunny Day Series, Zipper will reward them with the DIY recipe for a Wobbling Zipper Toy.

Zipper's poster can be obtained from Nook Shopping after inviting him to Photopia via his amiibo.

Prior to its removal in version 2.0, when the player scans Zipper T. Bunny's amiibo card and tries to invite him, he will say:

Hello, hello, and how do you do? You've reached the one and only lucky bunny, Zipper. It's true!
Hippity hoppity how can I help you?
What's that? You want me to hop-hop-hop on over to your campsite?
Well hippity skippity, that sounds like fun! But I'm so busy right now, I really can't. Very sorry, very sorry!
You understand right? A guy like me has a lot going on…
Hippity hoppity ho! Thanks for the invite though!

Zipper appears in Animal Crossing: Pocket Camp as the host of the Garden Safari event "Zipper's Wonderland." For this event, the player is required to catch creatures known as Scramblers, which only appear after special flowers have been planted. If a player manages to catch one, Zipper will give the player a piece of furniture from the Wonderland Series. The player can also be disguised as Zipper by wearing the Zipper costume and Zipper Mask.

Zipper appears as a trophy in Super Smash Bros. for Nintendo 3DS.

Zipper appears as a spirit in Super Smash Bros. Ultimate. 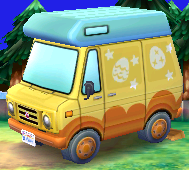 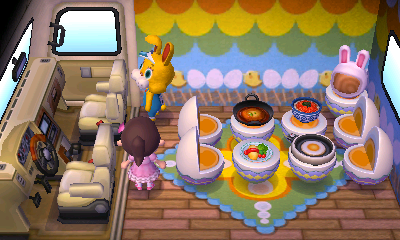 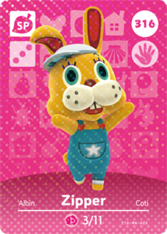