"Hey, thanks for being so nice to me before! Whoa, it's so cool to be back to this town again! I've got the urge to keep traveling, though."
— Katie, Animal Crossing: New Leaf

Katie is a cat in the Animal Crossing series who is the daughter of Kaitlin. She can appear in players' towns randomly once they have opened their gate and accepted friends from another town over Wi-Fi. Her name, Katie, may derive from her species.

Like her mother, Katie is a yellow cat with brown bangs, orange-red insides of her ears, an oval-shaped nose, and dark-brown eyes with one eyelash each. She wears a blue dress and pink blush. Beginning in New Leaf, Katie appears slightly older. She now wears a yellow hat, similar to that worn by kindergarten students in Japan, along with an orange backpack.

In Wild World and City Folk, Katie is a young timid child who is easily brought to tears. She is initially found crying due to being separated from her mother. She also starts crying if she trips when following and attempting to catch up to the player. In New Leaf, she no longer falls down and cries, indicating her maturity. However, if the player denies her request to travel with her, she briefly reverts to her old timid personality.

Katie first appears in Animal Crossing: Wild World alongside her mother, Kaitlin, and will appear in the player's town crying and wishes to be reunited with her mother. She will tell the name of the town where her mother might be, which is a town the player had previously visited. The player must go to this town with Katie, in which she and Kaitlin will be reunited at the checkpoint of the other town. Katie walks slower than the player and may get left behind or fall and cry. Upon doing this, she and Kaitlin will thank the player, and after a day, either she or her mother will send the player a present in the mail. If ignored, Katie will leave after a week since she first appeared.

Due to the termination of the Nintendo Wi-Fi Connection on May 20, 2014, the only official capacity Katie can appear in the player's town is via local wireless multiplayer. While official support for Nintendo Wi-Fi Connection is no longer available, fans have made custom servers to make online play accessible again.[1] Due to the lack of multiplayer functionality in the Wii U Virtual Console release of Wild World, Katie cannot appear in the player's town in that version.

Katie returns alongside Kaitlin in Animal Crossing: City Folk, though her role in this game is not that different from her role in Wild World. She will still appear in the player's town and ask to be reunited with her mother in a town the player had already visited. Afterwards, she or her mother will send the player a present in the mail.

Due to Nintendo Wi-Fi Connection being shut down as of May 20, 2014, it is no longer possible to encounter Katie in town, and the presents she gives to the player are unobtainable. However, fans have made custom servers to make online play accessible again in an unofficial capacity.[1]

Katie returns in Animal Crossing: New Leaf, without her mother. This time, she is traveling the world on her own, and she wishes for the player to take her to another town. She may mention which towns she has previously visited, but unlike the previous games, any town will fulfill her goal. If the player chooses to help her, they should guide her to the train station and take a train with her. After exiting the train, Katie will mention that the main reason she decided to follow the player to the other town is that she is uncomfortable traveling alone. A day later, she will send the player a thank-you present in the mail.

There is a possibility, especially if the destination town has already received Katie on the same day, that Katie may drop her ticket upon boarding the train, causing her to jump off the train and pick it up. This event causes the player to leave her behind. However, the player will still receive a thank-you present from Katie the following day; she explains that she took the next train to her destination. If ignored, Katie will stay in the player's town for the whole day.

While initially absent from Animal Crossing: New Horizons, Katie was added in 2.0 Free Update. Katie's poster can be obtained from Nook Shopping after inviting her to Photopia via her amiibo. She also can be summoned to The Roost.

If the player places Katie's Sakura Swing (only available for limited times) at their campsite, Katie will interact with it.

Kaitlin and Katie in Gekijōban Doubutsu no Mori.

Katie makes a cameo in 🎬 Gekijōban Doubutsu no Mori. She is seen in audience of the K.K. Slider performance, sitting with her mom.

Katie, along with Kaitlin, appears as a spectator in the Smashville stage, and as a trophy in Super Smash Bros. Brawl.

In Super Smash Bros. for Wii U, Katie appears with Kaitlin once again in the Smashville and Town and City stages, however, Katie has a standalone trophy, unlike Brawl. 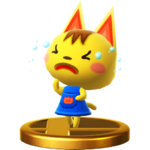 Life is short and time is swift.

Life is short, and time is swift.

Below are the items Katie can reward the player with in each game. 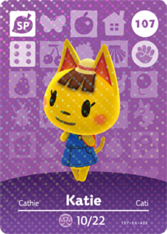