Kazumi Totaka (戸高 一生, Totaka Kazumi, born August 23, 1967) is a video game composer. Totaka has been the sound director for all mainline games in the Animal Crossing series, as well as the composer for many of the tracks. He has composed various songs from other Nintendo games, and is known to hide a short melody known as "Totaka's Song" in games he has worked on. This is present in all Animal Crossing games as "K.K. Song".

The character K.K. Slider is a caricature of Totaka, and his full name Totakeke is derived from "Totaka K.", since family names are written first in Japan. While most of K.K.'s songs in the original games were composed by Toru Minegishi, Totaka rearranged them for the live performances.[1]

Totaka is also known for voicing Yoshi in the Mario series, which he has done since the game Yoshi's Story in 1997.

Songs are listed by the first game they appeared in, though they may have reappeared in future games. Credits are not necessarily exhaustive and reflect only what can be sourced. 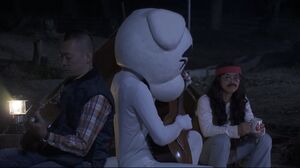 Totaka was also credited for the arrangement of the live versions of other K.K. songs that debuted in New Leaf on Atsumare Dōbutsu no Mori: Original Soundtrack 2, though it is unknown if he or the other composers, Manaka Kataoka and Atsuko Asahi, actually composed them. The exception is "Bubblegum K.K.", which was composed by Asahi.

Totaka was credited for the following tracks on the official soundtrack release for New Horizons:[10]

Totaka was also credited for the following tracks on the second soundtrack release:[4]