Sable Able is a hedgehog in the Animal Crossing series, co-owning the Able Sisters tailor shop. She is a shy, reserved character that prefers to work in the background while her younger sister, Mabel, assists customers, though she is very talkative when she opens up. Her name refers to the color sable, which is reflected in her brownish spines. 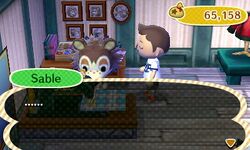 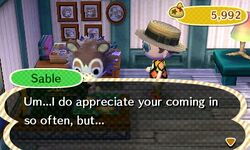 Sable talking to the player for the first time 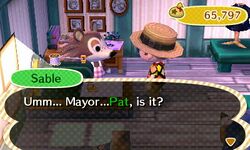 Sable recalling the player's name for the first time 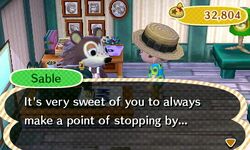 Sable thanking the player for coming so often

Sable is a brown hedgehog with pink freckles and drowsy, shy eyes. She has no visible mouth, and her nose instead twitches when she talks. She wears a pink and white gingham apron and has a head full of large, spiky bristles.

Sable is a reserved, somewhat insecure person who stays in the background, while her sister, Mabel, takes the spotlight. She does not appear to be very social, as she will ask the player to leave her alone the first few times they try to talk to her, though she says this in a polite tone of voice. However, if the player befriends her, she becomes much more kind and talkative, commenting on the day or her personal life, including her past. Sable is a focused and determined individual when it comes to work, refusing to take any other actions until the task is done.

Though her exact age is unknown, Sable is the elder sister of the two Able Sisters, stated as raising Mabel as a child following the death of their parents. In Animal Crossing: Wild World and Animal Crossing: City Folk, Sable tells the player that she and Mabel are ten years apart.

Sable's life is very focused around the world she grew up in - she is happy with the slow pace of the country life and has proven to be firm friends with others from the village, most notably, Tom Nook. When Sable was only a young girl, her parents died, leaving her to care for her younger sister. She reminisces frequently about her parents, often sharing stories of her childhood. It is not known how her mother and father died, but it is certain that Sable was very unprepared, having to mature quickly and sacrifice her own happiness for that of her sister, raising Mabel in place of her late parents. This lowered her self-confidence and made her the introverted adult she is today. After her parents' death, Sable took over the family business and taught herself to embroider and make clothes.

Mabel is Sable's younger sister, as well as her foster child following the death of her parents. As such, the two share a close bond despite their differences, though Mabel prefers to keep this to a minimum, saying to not bring up anything regarding Sable's past. In New Horizons, Sable affectionately refers to Mabel as "Mabes." Additionally, Mabel sometimes calls Sable "Gray-ble."

When first mentioned, it is implied that Sable and Label are on rocky terms with one another, as Label abandoned Sable following the death of their parents, leaving Sable to care for Mabel alone.

Sable and Tom Nook are childhood friends and have known each other for several years, despite not making direct contact since Nook's attempt in the city to strike rich. Prior to this, Tom and Sable would hang out with each other often, even stargazing with one another and creating their own designs. Even after Tom Nook moves out, the two exchange letters with one another, and Tom Nook even gifts Sable with scissors for her birthday at one point. This meant a lot to her, since she forgot it was her own birthday.

Sable is implied to have a romantic interest in Tom Nook, stating to have wished blessings on Tom Nook each night during his time in the city, which also means that she wishes the best for Nook as her friend. Prior to Animal Crossing: New Leaf, it was unknown if Tom Nook shared this sentiment.

Artwork of Sable from Animal Crossing.

Sable, though absent in the original Doubutsu no Mori, is added to its enhanced port, Animal Crossing with her younger sister Mabel. While her sister runs the shop, Sable can be seen sewing in the corner, keeping quiet and secluded. If the player talks to her, she will politely ask the player to leave her be, or frustratingly ask Mabel to help her with the "customer." However, if the player keeps talking to her consecutively over the course of two weeks, she will warm up to them and become their friend. When these conditions are met, Sable will share memories with the player about her childhood.

In Animal Crossing: Wild World, Sable has a very similar role as she had in Animal Crossing, keeping secluded at a sewing machine without moving. Once again, she will ask the player to leave her be at first, before becoming a friend of the player, after they continuously talk to her each day. She will also begin to say things like "Welcome! I'm so glad you decided to pay us a visit..." Sable also reveals to be a fan of a soap opera called Pointed Love, which she will comment on every Thursday. Sable is affected by episodes every so often, but this only happens if the player befriends her.

If the player befriends her prior to January, Sable will get depressed, much to Mabel's bewilderment. After talking to Sable enough during the month, Sable will reveal that she and Tom Nook were best friends before Nook moved to the city. Although prior to moving to the city, Sable and Tom Nook would climb onto the roof of the Observatory (though she implies that it was a separate building at this time, rather than part of the museum) and gaze at the stars, eventually inspiring Sable to design a "Star Shirt" constellation. Sable will speak of her and Nook writing to each other after Tom Nook's move, even appearing to have an admiration for him, as she would wish to "keep Tom Nook's pure spirit protected" from the apathetic attitude of the city, and even receiving a pair of scissors from him on her birthday. While talking, she will act apologetic about her monologing to the player, though she will reminisce about what she says often.

In City Folk, Sable's role remains unchanged, though the player only needs to speak to her for twelve days to befriend her, as opposed to two weeks in other installments. As in Wild World, Sable will make comments about the day of the week and sometimes tell the player stories about her past life and childhood. During an episode, Sable will reveal that a worker in GracieGrace, named Labelle, is her younger sister. Sable mentions that she does not get along with her sister, as she feels that Labelle abandoned her to go to the city when their parents died, leaving her alone to look after Mabel. A glitch also allows a player to be stuck behind Sable during online play.

In New Leaf, Sable is given a more extensive role, but she is still a seamstress working at the Able Sisters, now located on Main Street. This time, when the player befriends her, she will allow them to access the QR Code machine, through which they will be able to store designs within QR Codes.

In New Horizons, Sable remains as the seamstress in Able Sisters, though she has a reduced role compared to that from New Leaf. The player can still befriend her by talking to her over the course of a few consecutive days, but as the QR machine is available in the store by default, doing so is no longer a requirement in order to use it. Instead, she will give the player special patterns once per day that can be used to customize furniture and the player's NookPhone case. The patterns will depend on what she is sewing at the moment.

Prior to its removal in version 2.0, when the player scans Sable's amiibo card and tries to invite her, she will say:

Hi! Sable here... Oh, hi, Player. How are things?
A...campsite? Well, that does sound like fun, but I'm pretty busy... I don't think I can do that.
And here you went to the trouble of inviting me... Thank you for thinking of me, though... 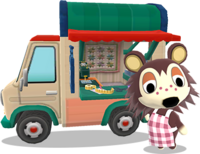 Sable reappears in Animal Crossing: Pocket Camp, running the Able Sisters To Go shop with her younger sister Mabel. Sable continues to work as a seamstress in this game. However, the player is unable to talk to her and thus is unable to befriend her. 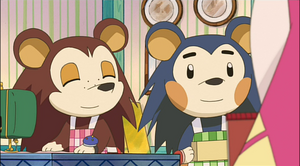 Sable has a minor role in 🎬 Gekijōban Doubutsu no Mori. She is seen sewing patterns, like in the games. Also, she is seen sitting in the front row next to Mabel during K.K. Slider's performance. She does not say much, but she greets Margie when she comes in with some drawings.

In Super Smash Bros. Brawl, Sable appears as a trophy and a sticker, and will occasionally appear in the background of the Smashville stage.

In Super Smash Bros. for Nintendo 3DS / Wii U, Sable once again appears as a trophy and appears in the background of the Smashville and the Town and City stages.

In Animal Crossing: Happy Home Designer, Sable will share a house with Mabel and Labelle. 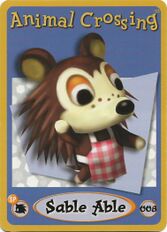 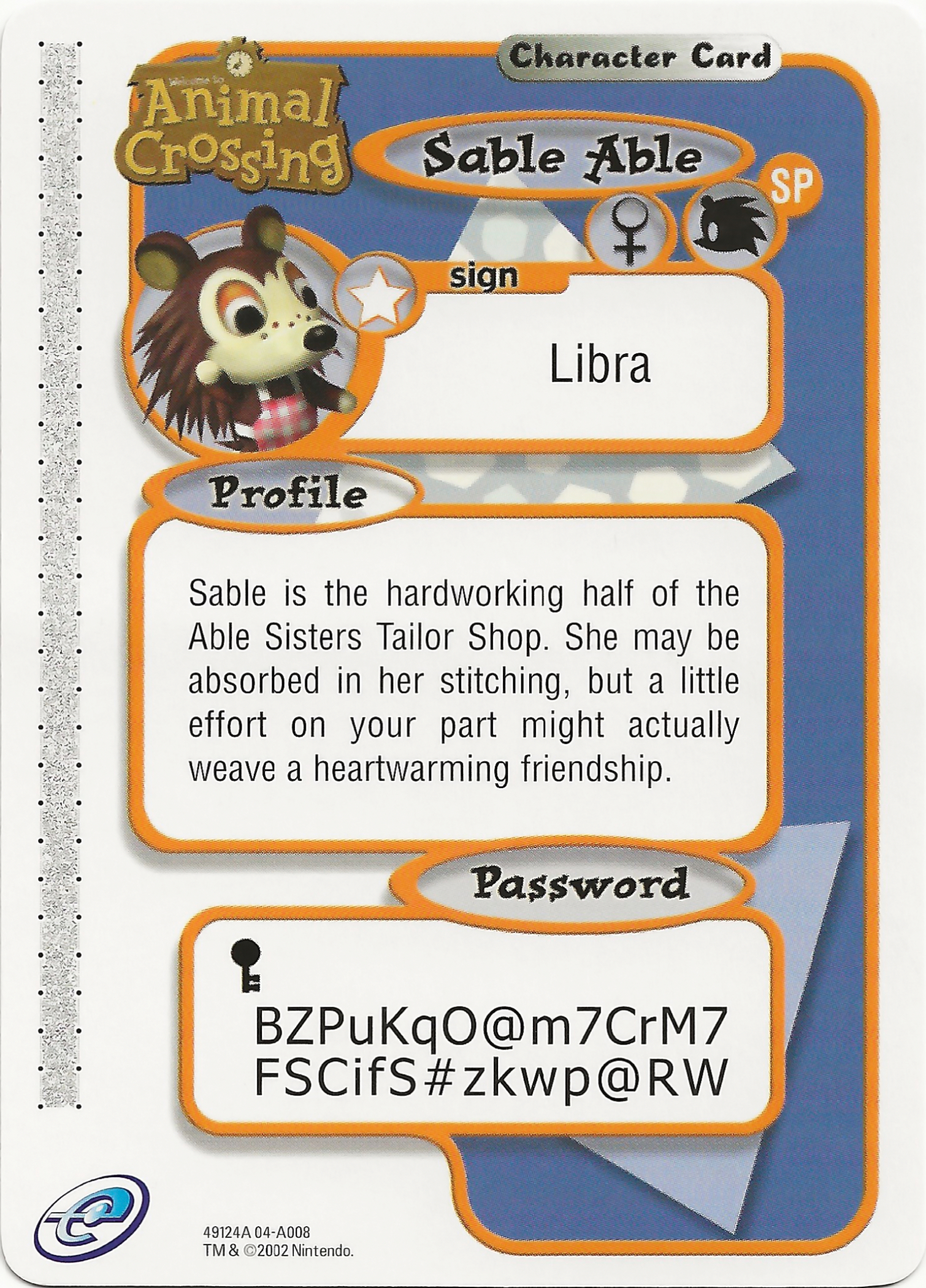 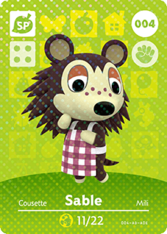 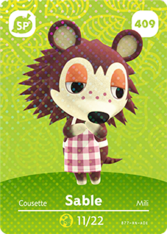