"I've been selling turnips here on Sunday morns for 'bout 60 years now. Maybe even more! Come to think of it, I forget just how long... No matter!"
— Joan, Animal Crossing: New Leaf

Joan, also known as Sow Joan, is a boar in the Animal Crossing series who visits the player's town each Sunday morning to sell turnips. The name "Sow Joan" is a reference to the real-life stock market index, the Dow Jones Industrial Average. She often mentions how she has been selling turnips for around sixty years.

In Animal Crossing: New Horizons, Joan's role of selling turnips is instead fulfilled by her young granddaughter, Daisy Mae.

Artwork of Joan from Doubutsu no Mori.

Joan is a brown boar who wears a blue dress with a white hood, and work pants with pound-sign patterns. She has a yellow nose, black hair, large orange cheeks, a pair of white tusks and a basket with turnips on her back. Her hands and feet are also yellow. Her eyes have beige circle linings, white rims, and black pupils shaped like diamond stars.

Artwork of Joan from Animal Crossing

In Doubutsu no Mori and Animal Crossing, Joan appears in town every Sunday before noon, selling turnips to the player. Unlimited white turnips can be bought each week from Joan, which can be sold to Tom Nook, which will have different prices depending on the "Stalk Market." These turnips are only profitable between Monday and Saturday.

If the player travels on the train, Joan can be seen sleeping in the background, occasionally waking up in surprise, before going back to sleep. 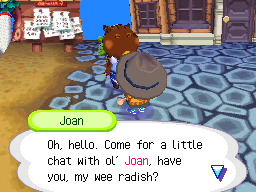 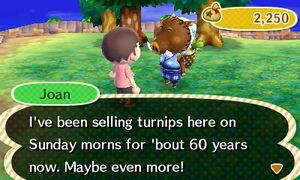 In Animal Crossing: New Leaf, Joan no longer sells red turnips. However, she will let the player buy more than 990 turnips, unlike Wild World and City Folk. Joan can be asked to explain her business and turnips. She wishes not to explain how it works, but will not complain if prompted. 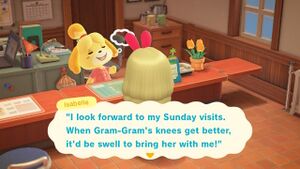 A quote for a three-star island from Daisy Mae in Animal Crossing: New Horizons that mentions Joan

Joan is sometimes indirectly mentioned by her granddaughter, Daisy Mae, who refers to her as "Gram-Gram." Additionally, Joan's poster can be obtained from Nook Shopping after inviting her to Photopia via her amiibo. Since the 2.0 Update, Joan can visit The Roost. She will bring Daisy Mae along if invited to The Roost. She can also be scanned into Photopia via her amiibo card. 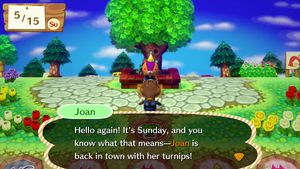 In the Board Game mode in Animal Crossing: amiibo Festival, Joan visits town each Sunday to sell turnips to the players. She also appears as a standard visitor; if a player lands on a special-event space while she is visiting, she either gives the player 10 to 30 turnips or makes them pay 1,000 Bells to "help make things right" after her turnip field was vandalized.

Joan appears as a trophy and a sticker in Super Smash Bros. Brawl.

Joan appears as a trophy in Super Smash Bros. for Wii U.

Joan appears as a spirit in Super Smash Bros. Ultimate.

A rotten turnip is still a turnip. 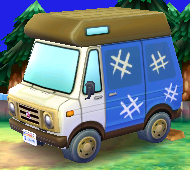 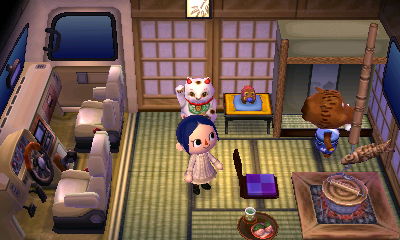 A rotten turnip is still a turnip. 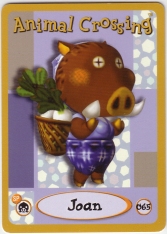 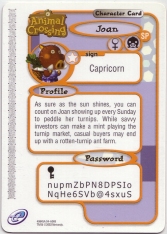 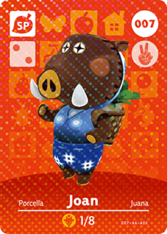