Leif is a sloth in the Animal Crossing series introduced in Animal Crossing: New Leaf. As a nod to his ownership of the Garden Shop, his name is a pun on the word "leaf." In his main appearances, he runs gardening shops and offers weeding services to the player.

Leif is a lightish-brown sloth with a white face, a pair of black round eyes with white rims and black thick swirling lines surrounding them, a small reddish-brown nose shaped like an oval, a pair of round pink cheeks, a black inner mouth with red lips, and a pair of hands with small blackish-gray claws. When working, he wears a green cap with a flower print with a green circle core, an orangish-yellow apron with a big pocket and reddish-brown buttons with red crossed strings on each strap, and a pair of small green boots.

Leif is a cheerful lover of nature, explaining why he runs the Garden Shop and hosts Weeding Day. 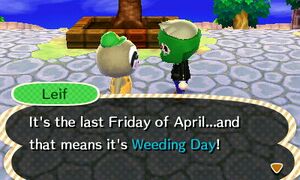 Leif telling the player about the start of Weeding Day in New Leaf.

In Animal Crossing: New Leaf, Leif runs the Garden Shop, where the player can buy flowers, saplings, fertilizer, and gardening tools such as the Watering Can and the Axe. After Timmy and Tommy's store expands to T.I.Y., the Garden Shop will merge, Leif will have a new, larger selection of items, and additionally will offer a weed-pulling service.

Leif may be found in the player's town if more than 50 weeds are present, fast asleep, and if spoken to, he wakes up and asks the player to help pull the weeds. He will maintain a count of the remaining weeds so that the player knows how many still need to be uprooted. Depending on how many weeds the player pulled and whether it was done in their own town or another player's town, he will gift the player with a random flower bag, fertilizer, perfect fruit, or an exclusive furniture item as a reward for completing the task. 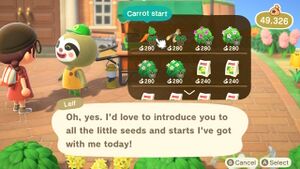 Leif offering the player some items in New Horizons.

While initially absent from Animal Crossing: New Horizons, Leif returned in the 1.2.0 April Free Update. He regularly appears in front of the Resident Services building to sell an assortment of gardening goods, such as a in-season and a out-of-season shrub start, non-native flowers, and plants to grow produce such as Pumpkin Starts and Wheat Starts. He also buys weeds for twice their usual selling price. His shop closes at 10 PM.

Outside of Nature Day, if the player purchase from Leif on three separate occasions, he'll give the player a DIY recipe for a Hedge.

With the release of the 2.0 update, Leif now has a shop open at the plaza on Harv's Island. However, he will continue to visit the player's island about every two weeks. Outside of his regular services, he also offers the player to remove all weeds in their island for 100,000 Bells, such that all the weeds will be placed in the recycle box on the following day for the player to take.

In Happy Home Paradise, Leif can be found on the beach outside Paradise Planning after the player has designed the school. If the player agrees to take him to it so that he can give a lesson on flowers, they will be able to use hybrid flowers in designing vacation homes.

Prior to its removal in version 2.0, when the player scans Leif's amiibo card and tries to invite him, he will say:

Heya, Player! Were you trying to get in touch with Leif?
'Cause that's me.
Did you invite me to go camping? That's the happiest news I've heard all day, my friend.
But I gotta sit this one out. See, I already promised this nap here that I was gonna take it, so...
Until next time, friend!

Leif appears as a Miiverse stamp in Animal Crossing Plaza.

In Animal Crossing: Pocket Camp, Leif returns to host Leif's Spring Flowers Event. This is similar for Rover and Lottie events so far. The creatures are ladybugs and the flowers are called "sleeping beauties" and "white clovers."

Leif makes an appearance as a collectible trophy.

A lazy man begins work in the evening.

A lazy mammal begins work in the evening.

The following is a list of items sold by Leif in Animal Crossing: New Horizons. 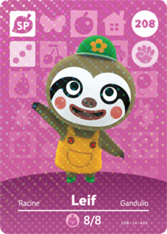