The Garden Shop, also known as the gardening shop, is a store in Animal Crossing: New Leaf owned by Leif that sells gardening-related items. It is located on Main Street, directly to the right of Timmy and Tommy's store. Items sold at the Garden Shop include flower bags, saplings, axes, and watering cans, among others.

The Garden Shop is built once the player has performed at least thirty gardening actions (e.g., watering flowers, planting saplings, pulling weeds, etc.) and has lived in town for at least five days. Once Timmy and Tommy's store upgrades from Super T&T to T.I.Y., the Garden Shop is also expanded and partially merged with it, accessible both from within T.I.Y. and via a separate exterior entrance. Once Timmy and Tommy's store upgrades from T.I.Y. to T&T Emporium, the Garden Shop is expanded again and completely integrated into it as a section on the first floor known as the gardening corner. 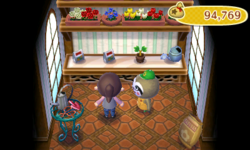 The Garden Shop as it initially appears

The Garden Shop initially sells four items each day, including two flower bags,[nb 4] one Sapling or Cedar Sapling, and one Axe or Watering Can. 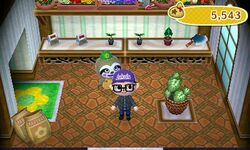 The Garden Shop after being merged with T.I.Y.

After being merged with T.I.Y, the Garden Shop expands, selling seven items, including two flower bags,[nb 4] two bush starts, one Sapling or Cedar Sapling, one Axe or Watering Can, and one exclusive garden-themed furniture item. Leif now offers a weeding service, where he will automatically remove all the weeds from the town for a price that varies based on the number of weeds in the town. This can only be done if the player's town has at least thirty weeds in it. 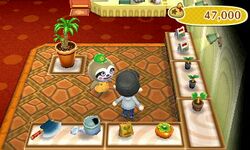 The gardening corner in T&T Emporium

After being merged with T&T Emporium, the gardening corner expands again, selling ten items, including two flower bags,[nb 4] two bush starts, one Sapling or Cedar Sapling, one Persimmon or Bamboo Shoot, one bag of Fertilizer, one Watering Can, one Axe, and one exclusive garden-themed furniture item. Leif's weeding service returns from T.I.Y.

The following furniture can be sold at the Garden Shop in T.I.Y. and gardening corner in T&T Emporium:

Includes data sourced from this Item List, compiled by Liquefy.

The Garden Shop's theme is initially slow-paced with horns. When T.I.Y. is built, since it is in the same building, a new rearrangement of the Garden Shop theme matches on top of it. These are usually never heard at the same time, but seamlessly change when going in between rooms.