The Reset Surveillance Center, sometimes shortened to Reset Center, is a location in Doubutsu no Mori e+, Animal Crossing: City Folk, and Animal Crossing: New Leaf. Inside, Mr. Resetti and his brother, Don, live and work. The Reset Center is normally inaccessible by the player and can only be entered under specific circumstances.

In all games, there is a reset alarm that can go off, notifying the Resettis that someone has reset. In City Folk and New Leaf, the Resettis have motorized chairs that send them out to deal with a resetter when a reset is detected. 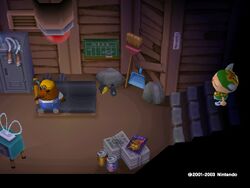 A player entering the Reset Center in Doubutsu no Mori e+.

In Doubutsu no Mori e+, the Reset Surveillance Center can be accessed once per week, and to access it the player must have reset at least twice total and once within the past seven days. If the requirements are met, on a random day, hitting one of the rocks in town causes the rock to crack; hitting it again causes it to break, revealing a hole underneath which the player can enter. Inside, Mr. Resetti, Don Resetti, or both appear and have unique dialog on each visit. For Don to appear, the player must have met him before when resetting.

A player inside the Reset Center in Animal Crossing: City Folk.

In Animal Crossing: City Folk, the Reset Surveillance Center is located in a tunnel at the eastern end of the city. Its entrance is usually blocked by two traffic cones; however, on random evenings after 8 PM, a nearby light will be lit, and one of the cones will be pushed aside, allowing the player to enter. Inside, Mr. Resetti, Don Resetti, or both appear and have unique dialog on each visit: 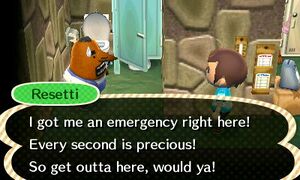 Mr. Resetti shocked at seeing the player in his headquarters in Animal Crossing: New Leaf.

In Animal Crossing: New Leaf, the player resets for the first time, Isabelle introduces Mr. Resetti to the player, and he explains that the Reset Surveillance Center was closed due to a lack of funding and the player can use their powers as mayor to restore it. Afterward, the Reset Center is added to the list of public works projects, costing 368,000 Bells. Lloid accepts payments at the train station, and unlike all other public works projects, no completion ceremony is held. Once the Reset Surveillance Center is built, it cannot be demolished, and Mr. Resetti will appear outside the player's house when they reset; without the center, Isabelle simply tells the player that they did not save the last time they played when loading the game.

The Reset Surveillance Center appears as a brown manhole cover, and between 9 PM and 12 AM[nb 1] on clear nights the day after it rains or snows, the cover can be open, allowing the player to enter it. Inside, Mr. Resetti, Don Resetti, or both appear and have unique dialog on each visit:

In the Board Game mode of Animal Crossing: amiibo Festival, there is a Reset Center feature that can be placed in the board-game town for 5 Happy Tickets.

This page could be improved with the addition of images.
You can help by uploading one or more images and including them on this page.
Retrieved from "https://nookipedia.com/w/index.php?title=Reset_Surveillance_Center&oldid=1080956"
Categories:
Hidden categories: