Super T&T is a store in Animal Crossing: New Leaf owned by Timmy and Tommy. It is the third incarnation of the Nooklings' store, and it appears on Main Street. Super T&T is similar in appearance to Nookway from Animal Crossing, Wild World, and City Folk. The store features more items than its previous incarnation, T&T Mart, while featuring shorter hours. 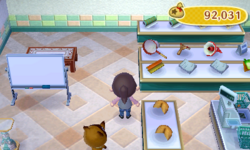 The inside of Super T&T

Super T&T sells eighteen items each day, including four furniture items (one of which is always wall-mounted), two wallpapers, two floorings, three tools, one Medicine, one Wrapping Paper, two sets of stationery, and one Melody Paper. During certain events the Fortune Cookies will be replaced with event-themed items, such as Fireworks Fountains or Candy.