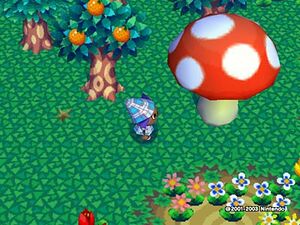 A Mushroom object in a player's town.

Objects are structures that can be constructed around the player's town in Doubutsu no Mori e+. Objects can be constructed through Tom Nook, who will ask which acre to build one in. After a location is selected and the construction cost is paid, the object will appear in place of a Signpost in the selected acre. Players could also order decorations from the Object Delivery Center on the game's official website, which would generate a password to give to Tom Nook until its discontinuation in 2019. 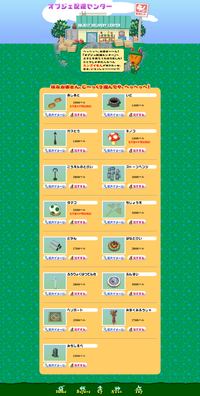 The main page of the Object Delivery Center

The Object Delivery Center was an Adobe Flash-based service hosted on the Doubutsu no Mori e+ official site that allowed players to generate codes for objects. This was the only way to obtain the Footprints, Egg, and Mushroom, and the only way to obtain objects in any one town that are not one of the three starting ones.

The site guided users through the process of selecting an acre and setting the player and town names. A code would then be generated, which could be told to Tom Nook to purchase the object. The endpoint used by the site to generate the codes was shut down in 2019, making codes unobtainable. Links to the objects were removed from the site, though they can still be accessed through direct URLs, and the Flash application can still run up to the code generation step.