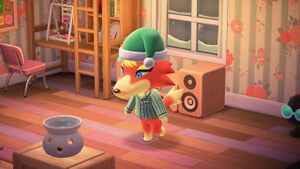 Sickness is an in-game element introduced in Doubutsu no Mori e+ that can afflict villagers. Villagers can become sick, which causes them to shiver (and sometimes show the 'sadness' emotion) and stay in their houses. In Animal Crossing: New Horizons, the affected villager will be sweating instead of showing the sadness emotion. When a villager is sick, they will not have normal conversations with the player, and they will only talk about being sick. They will often act delusional when sick, talking about fictional things as if they are real.

Prior to Animal Crossing: New Horizons[edit]

Villagers can gradually be recovered from being sick if they are given medicine by the player. The medicine can be purchased from Tom Nook's shop or the Nookling Stores once a day. Sickness usually lasts for three days if medicine is given every day, but this can vary slightly.

While villagers are sick, they will not react positively and will ask for medicine. Selecting the medicine will give a negative response if the player has no medicine in their pockets, but will open the pockets if the player does. After receiving medicine, the villager will usually remark on how bad it tasted, or will say that they are starting to feel better, and will thank the player.

In New Horizons, villagers may tell the player that they haven't seen someone for the entire day, signalling that someone is sick. The sick villager will perk up immediately once given medicine, and will give the player a gift right away. However, if the player's pockets are full, the villager will send the gift to their mailbox the following day. They will be able to ask the player for favors, though they will remain inside their house for the entire day.

In multiplayer, when the villager has yet to be healed, they cannot be visited. Visiting a healed villager will inform the player that they're grateful for receiving medicine.

If a sick villager's amiibo is called in Happy Home Paradise, the player will be informed that they are "not feeling their best today". Additionally, if they were working at a facility at the time of them becoming sick, they will be replaced by a random villager.