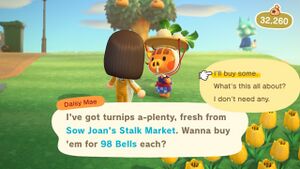 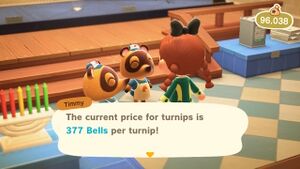 The Stalk Market refers to the system of buying and selling turnips in the Animal Crossing series. In the Stalk Market, players can buy and sell turnips in order to turn a profit, based on its fluctuating value as determined by the town store. The name is a pun on the real-life equivalent known as the stock market.

Turnips can be bought from Joan prior to Animal Crossing: New Horizons, or Daisy Mae in New Horizons, during Sunday mornings, before 12 PM. They will sell turnips at some price between 90 to 110 each, but will only sell them in batches of ten. They will only last for a single week, turning into spoiled turnips by the following Sunday which have no value at all. Any turnips at a player's town will spoil if they choose to time travel forwards (outside of their current week) or backwards.

In Animal Crossing: Wild World and Animal Crossing: City Folk, the player could only buy a maximum of 990 Turnips at a time. This limit is dropped in subsequent titles, where the player is only limited to how many they can afford and how many slots they have in their pockets.

The price of turnips changes per "period" for the entire week. For each day, there are two "periods": morning (before 12 PM) and afternoon (after 12 PM). The player can ask Tom Nook (prior to New Leaf), Reese (in New Leaf), or Timmy and Tommy (in New Horizons) how much they will buy turnips at that particular period. The prices can go from as low as 20 Bells to as high as 660 in a "large spike" pattern.

The prices for a particular week follow a specific pattern. In addition, the pattern for the current week may be influenced partly by last week's pattern.

Prices start with below 100 Bells on Monday morning, and will continue to decrease bit by bit after that. The player has to sell their turnips on a different town to turn a profit.

Prices start by decreasing until it gets interrupted. The week's highest price will be three periods after that. For instance, if the interruption was reported on a Tuesday afternoon, the peak will occur on Thursday morning. The peak will always be between 150 and 220 Bells. The prices will decrease after this peak.

This pattern is similar to the small-spike one, but the week's highest price will be two periods after the interruption. For instance, if the interruption was reported in a Thursday afternoon, the peak will occur in Friday afternoon. The pattern is characterized by its really large peak which can range between 200 and 660 Bells. The prices will decrease after this peak.

Prices will be completely at random, but will not go above 150 Bells.