This article is about the screenshots taken by the player. For the photos of villagers given to the player, see Photo. 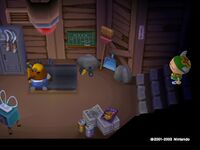 A photo taken in Doubutsu no Mori e+. Note the Nintendo watermark at the bottom-right.

In Doubutsu no Mori e+, if an SD card is connected to the Nintendo GameCube via a Memory Card adapter, photos can be taken with the Z button. The resulting screenshot can be saved to the SD card as a 640x480 TIF file with a watermark in the bottom-right corner that reads "©2001-2003 Nintendo". Photos on the SD card can be viewed in-game if "SD card" is selected in the startup menu.

A player taking a photo in City Folk.

In Animal Crossing: City Folk, a photo can be taken by pressing the 1 button on the Wii Remote. The photo will capture everything shown on the screen at that time, including HUD elements such as the clock. To instantly view the photo, the 2 button can be pressed. The photo can then be saved to an SD card. The game will store only one photo at a time, and each new photo will erase the one previously taken. To save multiple photos, each one must be saved to the SD card before taking another photo. The resulting screenshot is saved as a 896x480 or 640x480 JPG file, depending on the Wii's set aspect ratio.

As City Folk predates the Wii System Update allowing for high-capacity storage, the game only supports SD Cards up to 2 GB. SD Cards that exceed 2 GB or are SDHC/SDXC cards will be considered an "unknown device" by the game and cannot be used to save pictures.

Daisy teaching the player how to take a photo in New Leaf.

In Animal Crossing: New Leaf, a photo can be taken by pressing the L and R buttons simultaneously, and will capture any HUD elements displayed on the screen at the time of the photo. Only the top screen will be captured—it is not possible to take a photo of the touch-screen without using third-party software. It is also not possible to take a photo in certain areas. All photos are saved on the SD Card as 400x240 JPG files, and they can be viewed in the Nintendo 3DS Camera application.

The Nintendo 3DS has a limit of 3,000 photos that can be stored. When the limit is reached, a warning will be displayed saying that the player is no longer able to take photos.

The amiibo Camera is a feature introduced in Animal Crossing: New Leaf - Welcome amiibo that has similar functionality to the Nintendo 3DS Camera but adds the ability to add villagers currently in town, including the player. The user can also add villagers using the amiibo feature by tapping their respective card or figurine. Once in the canvas, their position, rotation, size, and depth can be changed, as well as the image's lighting, canvas, and timestamp. The villagers' outfits are the ones they wear by default and cannot be changed, while the players' are their outfits during gameplay.

The amiibo Camera remembers which villagers have been there and their positions and emotions, and, after moving out, they will still appear in the application until they get removed by the user. The only way to reintroduce them is to scan their respective amiibo, or make sure they reappear in town.

The UI of the Camera app in New Horizons.

In Animal Crossing: New Horizons, players can take a screenshot by pressing the Capture button on the Joy-Con or Pro Controller like any other Nintendo Switch game. However, on the NookPhone, there is a designated Camera app unlocked from the start. Players can add several different filters and borders to customize their screenshots and take a screenshot with the + button. The resulting screenshots are saved to the Nintendo Switch's photo album as 1280x720 JPG files, regardless of whether the Switch is in Handheld or TV Mode. Players can also hold down the Capture button to take a 30-second video of gameplay. Beginning in version 1.4.0, the HUD during photo mode can be hidden by pressing in the R Stick.

A new addition to New Horizons is Photopia on Harv's Island, where the player can arrange various sets with props and villagers. These villagers can be residents from the player's island, or they can be characters scanned in via amiibo. In Happy Home Paradise, the player can take a photo and use that as the main photo for a resident's vacation home. If a resident already has a photo for their vacation home, then when taking a new photo the player may choose to continue using the old photo or use the new photo.

Beginning in the 2.0 Free Update, an upgraded version of the Camera app called Pro Camera is available, which gives the player the ability to take photos in first person mode, as well as setting up a tripod to lock the camera in place.

Filters and overlays can be added to photos by pressing ZL and L, respectively. Below is a gallery of each filter and overlay.