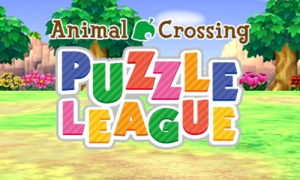 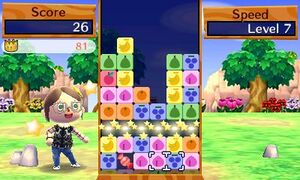 A screenshot in the game's "Candy Mode" 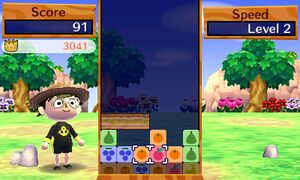 A screenshot in the game's "Garbage Mode"

Like previous Puzzle League installments, panels of various colors are stacked in a well. New panels rise from the bottom of the stack, slowly pushing the stack upward. If any part of the stack pushes at the top of the well for too long, the game is over. The player controls a cursor to swap two panels horizontally, or one panel with an empty space. If three or more panels of the same color line up horizontally or vertically, these panels disappear. Clearing more panels at once results in a "combo", and panels dropping into multiple separate clears results in a "chain".

New to the Animal Crossing installment are special abilities, unlocked by clearing panels and filling a meter on the Touch Screen. By default, the player is able to use Horizontal Wipeout, which clears a single row of panels, but they are able to change this ability by tapping in different amiibo figures.

The goal of Story Mode is to become the mayor of Puzzle League by gaining villagers' approval. In each stage, there are three "campaign" rounds and one boss round. Campaign rounds play similarly to the usual Puzzle League "Stage Clear" mode, where the goal is to bring the stack of panels below a set line. The faster the goal is reached, the more support will be earned, but campaign rounds will never give support beyond 60%. Boss rounds then have the player clear panels to raise approval rating further, until it reaches 100%. Each boss round after the first has a gimmick tailored to specific modes.

Stage 1: Tortimer, while still retired, now aims to become mayor of the league and make it a place where the elderly are treated with respect. There are no added gimmicks to this boss round, and completing it for the first time unlocks Score Attack mode.

Stage 2: A random villager from the player's town will set off to become mayor of the league, with their ambitions determined by personality type. In this boss round, the player must maximize their support in two minutes, or else they lose by default. Completing this stage for the first time unlocks Time Attack mode.

Stage 3: A second random villager from the player's town will push to become mayor. In this boss round, approval rating only rises when clearing candy panels. Candy panels are mainly cleared by clearing adjacent panels, but clearing candy panels by connecting three or more will create a bonus double candy panel, which can be cleared twice in a row. Completing this stage for the first time will unlock Candy Mode.

Stage 4: A random special character will then push to become mayor. In this boss round, garbage blocks will drop from above the stack in an effort to quickly fill the player's well. Clearing panels adjacent to a garbage block will break it down into more panels for the player to use. Clearing this stage for the first time will unlock Garbage Attack.

Stage 5: A third and final random villager from the player's town will compete for control of the league. This boss round combines garbage blocks with the two minute time limit.

Stage 6: Isabelle will then pitch to become mayor, expressing her understanding of the task through her current job as a secretary. This boss round combines garbage blocks with the candy panel requirement.

Stage 7: Cornimer makes a return, competing to supposedly set up acorn-themed holidays, as opposed to his true motive of respect for the elderly. There are no campaign rounds in this stage, so the player must gain approval from 0%. Additionally, approval rating can only rise through combos and chains, and garbage blocks are added into the mix. Completing this stage marks the end of Story mode, and clearing it for the first time will unlock Kinda Hard mode.

When playing Story Mode again, the player may opt to play in Kinda Hard Mode, which adds a new colored panel into the grid.

As the player achieves certain conditions, they will be mailed as prizes from Nintendo.

Puzzle League contained new tracks which may have been composed by Shinobu Nagata, who was credited for Welcome amiibo staff. Fanfares from past Panel de Pon games composed by Masaya Kuzume were also used.

This page could be improved with the addition of images.
You can help by uploading one or more images and including them on this page.
Further details: Needs gameplay screenshots

This page could be improved with the addition of images.
You can help by uploading one or more images and including them on this page.
Further details: Needs gameplay screenshots
Retrieved from "https://nookipedia.com/w/index.php?title=Animal_Crossing_Puzzle_League&oldid=1066611"
Categories:
Hidden categories: