Animal Crossing: Happy Home Designer is a sandbox game for the Nintendo 3DS released in 2015. It is a spin-off entry in the Animal Crossing series where the player designs homes for clients. It is also the first entry in the series to be compatible with amiibo, utilizing a series of Animal Crossing amiibo cards that were released alongside the game. 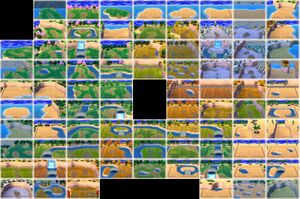 All of the possible home locations available in Happy Home Designer

While previous titles focused on an open-ended playstyle, Happy Home Designer takes a specific gameplay element, interior design, and expands upon it to create a unique Animal Crossing experience. The game achieves this through its new user interface which turns the bottom screen of the Nintendo 3DS into a top-down floor planner where the player can easily manipulate objects in the room using the stylus. An expansive catalog is also included and features a new categorization system that groups together items of a similar theme or function. As the player completes more of the villagers' requests, additional items are unlocked. Happy Home Designer also allows players to decorate the immediate surroundings outside a client's home by placing furniture and greenery, a feature that would play a prominent role in Animal Crossing: New Horizons.

In keeping with other Animal Crossing titles, Happy Home Designer allows the player to customize their character according to their tastes and is the first game in the series to allow the player to permanently set their skin color. In previous titles, darker skin could only be obtained by tanning and would fade unless properly maintained. All of the available hair colors and styles from New Leaf are brought over, although the hairstyles are gender-specific; female players cannot initially choose male-designated hairstyles. The player can also choose their eye shape and color at the beginning of the game. Unlike previous titles, the player's initial suit is permanent and cannot be changed, however, other articles of clothing can be changed and do not conform to the character's gender.

A player standing next to the amiibo phone

Along with the announcement of the game, physical Animal Crossing-themed cards featuring various characters from New Leaf were revealed. The cards are a more portable form of amiibo that can be used with the game to design a house for the character on the card. The cards can also be used to invite characters to visit homes the player has designed, where the player can watch and take pictures of the villagers interacting with one another. The cards can be scanned directly using the New Nintendo 3DS's built-in NFC reader. For owners of the standard 3DS and 2DS, a separate NFC reader will be released alongside the game and cards to ensure compatibility. Happy Home Designer is also compatible with the Villager amiibo, and when scanned will unlock a Villager Statue, an exclusive furniture item that can be used to decorate villager homes.

amiibo functionality is accessed within the game through the use of the amiibo phone, and cannot be used when a work day has been finished. The game will only recognize Animal Crossing amiibo figures and cards from the original four amiibo card series. Attempting to scan an amiibo from outside the Animal Crossing series yields the message, "Beep! I'm sorry, but I'm afraid I can't connect with any animals who don't live in this town." Attempting to scan a card from the Welcome amiibo series freezes the game. This includes Carrie's amiibo card, despite her being a client within the game.

According to Kyogoku, the inspiration for the interior design gameplay element came from the development team's experience designing villager homes in previous games, imagining how these villagers live out their lives, and thinking about how it would be fun to share that experience with the player.[7] The team also focused on allowing the player to bring their unique vision into each design, and while a budget limit had been taken into consideration at some point in the development cycle, it was decided that it would be best not to impose any external limitations on the player's design choices. [7]

Animal Crossing: Happy Home Designer was announced alongside Animal Crossing amiibo cards in a Nintendo Direct on April 1, 2015, in which gameplay was shown off and a release window of fall 2015 was revealed.[8]

In North America, Happy Home Designer coincided with the release of the New Nintendo 3DS in the region, with a special New Nintendo 3DS bundle with Cover Plates themed after Isabelle. Another bundle included the Nintendo 3DS NFC Reader/Writer.[13]

Nintendo partnered with Japanese 7-Eleven stores and Capcom to release exclusive villagers and themed furniture for Happy Home Designer.[14] On August 18, 2015, a goodbye message from Isabelle was posted to the official Animal Crossing Twitter account stating that Lottie would be taking over the account for the time being.

In North America, GameStop held a promotion where those who pre-ordered the game would receive an exclusive poster.[15]

Animal Crossing: Happy Home Designer received mixed to positive reviews from critics. Nintendo Life and IGN were mostly positive, praising the game's designer tools and sandbox nature, but criticizing it for a lack of challenge or a sense of progression.[22][23] GameSpot was more critical of the game, criticizing the lack of content present in main series Animal Crossing games, while also sharing the criticisms of its challenge.[24]

According to a weekly sales report by Media Create, Animal Crossing: Happy Home Designer sold 523,000 units in Japan during its first four days of release, selling through 76.29% of its initial shipment. [25] In comparison, Animal Crossing: New Leaf sold over 600,000 units during its launch window with a sell-through rate of 96.09%.[25] Happy Home Designer topped the weekly charts again in its second and third week of sale, moving an additional 181,377[26] and 140,235[27] units respectively before dropping to second place in its fourth and fifth week with sales of 65,904[28] and 48,978[29] units respectively. As of the week ending August 30, 2015 the game had a lifetime total of 959,049 copies sold in Japan. As part of their earnings release statement, Nintendo reported sales of 3.04 million units for Happy Home Designer during the fiscal year ending on March 31, 2016.[30]