Artwork of Tortimer from the Doubutsu no Mori+.

Tortimer is a light olive, elderly tortoise who wears black, rounded glasses. His shell has a multicolored pattern shared with that of Kapp'n. His mouth and eyes have notable wrinkles. When not wearing a hat, a single, large strand of black hair can be seen on his head.

In Doubutsu no Mori+ and Doubutsu no Mori e+, Tortimer wears a red zucchetto with blue lenses in his glasses. For his mayoral attire in the English version of Animal Crossing, Wild World, and City Folk, he wears a black top hat and a bowtie on the front of his shell, and his glasses have clear lenses. Starting in Animal Crossing: New Leaf, he wears a straw hat and a red aloha shirt, indicating his retirement.

A statue of Tortimer in town hall in 🎬 Gekijōban Doubutsu no Mori.

In numerous games and other media, Tortimer seems to have a large ego, to the extent of having his own cult of personality. This is most notably shown in 🎬 Gekijōban Doubutsu no Mori, as Tortimer continuously tells Ai of his authority as mayor by mentioning "me the mayor" multiple times, at the same time many of his egotistical possessions are shown. Tortimer's e-Reader card also claims that he enjoys his job as mayor, further supporting this. However, the extent of his ego is slightly toned down in the games, being reduced to him constantly reminding the player of his authority, such as during Nature Day in City Folk, with the slogan "Mother Nature and Father MAYOR." Despite this, Tortimer is also shown in the games to be somewhat greedy, as cranky villagers will sometimes say that he takes money the player donates to buy expensive things in Animal Crossing: Wild World, such as a plasma TV, while using the town of Boondox to justify the donations. However, these could simply be rumors. Tortimer, as part of his pride, also greatly respects the elderly as well as his species, asking the player at the beginning of each game who they look up to or their favorite animal, respectively. If the player does not choose "grandpa" or "turtle" for each respective question, Tortimer will be seen with a contemptful expression.

Occasionally, Tortimer talks about his life previous to becoming mayor. He talks about being an expert gardener and once had a wife, Mrs. Tortimer, though she is believed to have died tragically. Some villagers speculate that he became incredibly rich on the turnip market, while others believe he gained money illegally and used it to build the town hall. This is backed up by the fact that there are no taxes in the player's town, and that Tortimer himself never has to face election. Also, according to the gossip of villagers in City Folk, his shell might be fake.

Artwork of Tortimer from Animal Crossing.

Tortimer is introduced in Animal Crossing, Doubutsu no Mori's enhanced GameCube port. He is first introduced on the first day the player moves to town, walking around the wishing well, and he must be spoken to alongside the rest of the townsfolk. At any events, such as Graduation Day, he will stand near the wishing well to explain the event, as well as a gift to commemorate the occasion.

Tortimer returns in Animal Crossing: Wild World, serving the same role as the previous installment, except he is now stationed at the newly added town hall. As in Animal Crossing, the player is required to speak with him at the start of the game and afterward gives out special items to commemorate holidays. If no event is occurring, Tortimer can be seen napping at his desk in the town hall behind Pelly or Phyllis. Tortimer also appears as the host of Fishing Tourneys and Bug-Offs. During the Acorn Festival, Cornimer, a character who is heavily implied to be Tortimer in disguise, is introduced as the mascot of the event.

Tortimer's role is vastly changed in Animal Crossing: New Leaf, as he is no longer the mayor of the player's town. Instead, he has retired to Tortimer Island, a private resort home to various activities, known as "tours," while Isabelle fulfills his previous role of distributing festive items. On the island, Tortimer appears as the host of each tour, explaining the rules and regulations for each one, as well as keeping score of the player's progress. Cornimer's head also appears in the Hammer tours, attached to the lawnmower that is hit in the tour. His ego in previous games has also been greatly toned down.

Tortimer was added to Animal Crossing: New Horizons in the 2.0 Free Update. He appears at the open market on Harv's Island, where he allows the player to access their home's storage. In addition, Tortimer's poster can be obtained from Nook Shopping after inviting him to Photopia via his amiibo card.

Tortimer's role is once again changed in Animal Crossing: Pocket Camp, in which Tortimer hosted a garden event, Tortimer's Floral Fancy, from December 27, 2018 to January 7, 2019. 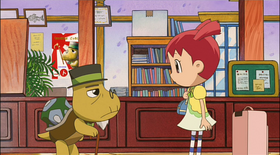 In 🎬 Gekijōban Doubutsu no Mori, Tortimer is the mayor of Animal Village. He appears in town hall when Ai moves in, then outside town hall in the winter to announce the Winter Festival and later to announce the winner of the festival. Throughout the film, Tortimer is running for reelection. Despite running unopposed, he is worried about losing, and he urges all of the residents to vote. At the end of the film, it is shown that Tortimer was the only one in Animal Village who voted.

In Super Smash Bros. Brawl, Tortimer appears as both a trophy and a sticker, and in the background of the Smashville stage.

Tortimer appears as a trophy and has a chance of appearing in the background of the Tortimer Island stage exclusively for the Nintendo 3DS version. In the Wii U version, Tortimer also appears as a spectator in the Smashville and Town and City stages, but doesn't have a trophy.

Remember to consider your retirement plan!

Remember to consider your retirement plan! 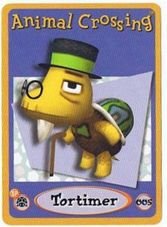 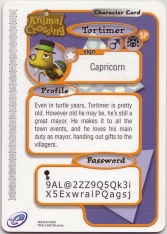 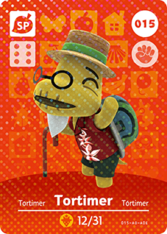