"Hey hey hey! Welcome to your one and only gateway to the skies, the <island name> Airport. How can I help you out today?"
— Orville, Animal Crossing: New Horizons

Orville is a dodo in Animal Crossing: New Horizons who works at the Airport as the ground crew. His and Wilbur's names are likely references to the Wright brothers, the inventors of the first successful airplane.

Like Wilbur, Orville is a dodo with blue feathers, a yellow face, slightly oval-shaped white eyes with black irises, a large beak with a large brown upper tip and a brown lower lip, a nose being a part of his beak's upper part, a brown inner-mouth with a light-brown tongue, white fingers, a tail with three white and bluish-cyan feathers, and yellow feet with stripes (colors being orange and brownish-orange) and dark-brown nails.

Like Wilbur, Orville wears a pilot's uniform, which consists of a white shirt, a red tie, and a black belt with a small pouch. He also wears a black headset. 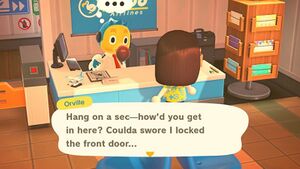 Orville explaining to the player that Dodo Airlines is not opened yet in New Horizons.

On the first day after the player has landed and marked their new home at their island, Orville will tell the player that they are unable to fly anywhere or open gates until the following next day. He then allows the player to fly or open gates. The player will have to go through things before flying or opening the gate like in previous titles, they also have the option to have a Dodo Code to share with players locally, online with friends or worldwide if shared. He will also give the player a first time read about local and online play and warnings before proceeding. Resident players who first joined the island can have access to fly to other islands or open their gate. He also will allow players to visit Harv's Island or use a Nook Miles Ticket to visit Mystery Islands.

Orville also handles sending letters to residents and villagers on the island, the player's future self and friends, replacing Pete, Pelly, and Phyllis's roles respectively. The player must at least have their friend visited their island or the player travels to visit their friend's island in order to send letters to their registered friends via friend list. They can only send two letters to the same friend per day. 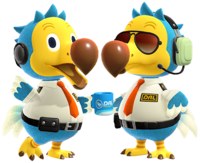 Free as a bird. 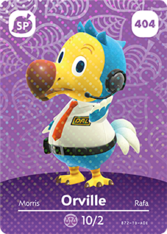