Not to be confused with Bianca.

"Hey, will you draw me another face? Draw a good one this time."
— Blanca, Animal Crossing

Blanca is a faceless cat in the Animal Crossing series. In games prior to Animal Crossing: New Leaf, she appears during multiplayer and asks the player to draw a face on her, while in New Leaf she is the host of April Fools' Day. Her name comes from her fur color; blanca is Spanish for white, and also from the word blank, referencing her absent, blank face.

In international versions of all games, Blanca is female, while she is male in all Japanese and Korean versions. In Doubutsu no Mori+, Animal Crossing and Doubutsu no Mori e+, she has a female voice. Beginning in Wild World, she has a male voice in all regions.

The change in gender was most likely not intentional originally, as Animal Crossing localizers Nate Bihldorff and Bill Trinen explained that they had to determine special characters' genders from their names and characteristics due to having ambiguous green text bubbles instead of blue or pink ones like villagers, the reason for Saharah having the same change.[1] With Blanca's Japanese name あやしいねこ (ayashi neko, "suspicious cat"), character and appearance purposely any lacking characteristics, the high-pitched voice was likely the only possible indicator.

In Animal Crossing: Happy Home Designer, Blanca refers to Jack as her old trickster rival. She mentions that she has been involved in a vicious prank war with Jack for so long that she can no longer trust her house and thus needs a new one. When Jack is spoken to after building his house, he references the prank war he is engaged in with Blanca and calls her a "pretender to the throne."

While initially absent from Animal Crossing: New Horizons, Blanca was added in 2.0 Free Update. Blanca's poster can be obtained from Nook Shopping after inviting her to Photopia via her amiibo. She also can be summoned to The Roost.

Blanca can appear as a spectator in the background of the Smashville stage.

Blanca reprises her role as a spectator in the background of Smashville, in addition to serving as a spectator for Town and City in the town portion of the stage. 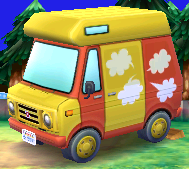 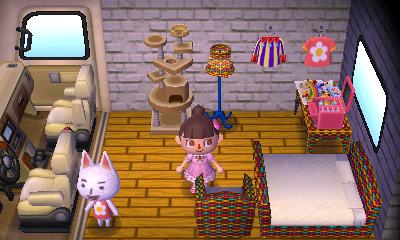 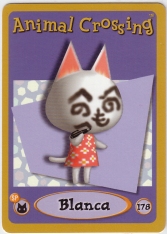 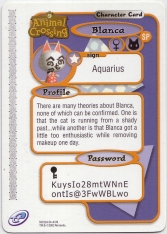 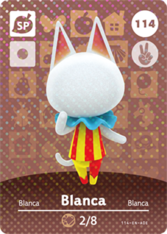