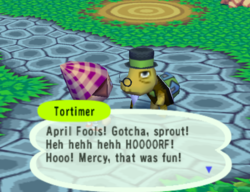 On April Fool's Day in Animal Crossing, Tortimer will appear near the wishing well. If spoken to, he will jokingly say he is retiring and making the player the mayor, then he will give them Super Tortimer, a nonfunctional "prank" NES game.

On April Fool's Day in Animal Crossing: Wild World, the player receives a letter from Mom saying that a tree fell onto their house and crushed it, before revealing it was just a joke.

In Animal Crossing: City Folk, Tortimer will appear outside town hall on April Fool's Day and will say he does not understand the idea of April Fool's Day, before pranking the player by giving them nothing. After he reveals it was a prank, he gives the player the Leaf—a furniture item whose appearance when placed in a house is identical that of a furniture item dropped on the ground outside. The player also receives a letter from Mom. 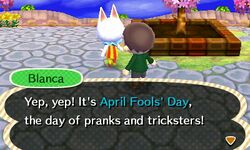 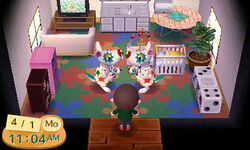 Blanca taking the appearance of Astrid in New Leaf

In Animal Crossing: New Leaf, April Fools' Day is a larger event, being hosted by Blanca, who appears in the event plaza. If spoken to, she will tell the player that she wants to play a game with them. The game involves Blanca appearing in a villager's house disguised as the villager alongside the real one. The player must run around their own town trying to find Blanca among any villager house, where two villagers will be angry at each other if the player manages to find where Blanca is. If talked to, the villagers will have an argument, and the player must, through each character's dialogue, determine which one is Blanca. One of the characters will give the player a towel, which the player must give to one of them; if given to Blanca, she will wipe off her disguise and move to another villager's house. Which character is the imposter is determined by statements made by them, including their favorite saying, birthday, skill, future goal, and number of siblings.

Promotional image of April Fool's Day in the 1.9.0 Free Update of New Horizons

Although April Fools' Day does not appear in Animal Crossing: New Horizons as a standard event, it appears as a Nook Shopping seasonal event beginning in the 1.9.0 Free Update. From March 26 to April 1, the player can purchase a Whoopee Cushion from Nook Shopping.