May Day is an event in Animal Crossing: New Horizons introduced in the 1.2.0 April Free Update. From April 29 to May 7,[nb 1] the player can visit a special maze-like island with Rover waiting at the end.

If the player speaks to Tom Nook at Resident Services from April 29 to May 7, he informs them that May Day celebrates those who work hard and that a May Day Tour is being held for the event. Tom Nook reserves a May Day Ticket for the player, which can be retrieved from Orville at the airport.

The May Day Ticket can be redeemed to go on the May Day Tour, where the player arrives on an island with an empty inventory. The island can differ between two layout depending on the year.[nb 2] The island consists of Hedges forming a maze. Tools, fruit, and materials must be picked up throughout the maze for the player to remove rocks, trees, and bushes. The bushes presented correspond to the current season that the player takes the maze in.

When the player returns to their island, they cannot return to the May Day Tour until the next year's May Day, and any items picked up on the tour are not kept. If the player speaks to Tom Nook after returning, he congratulates them for completing the tour. The next day, any Bell Vouchers picked up are mailed to the player by Dodo Airlines, and a prize is mailed by Rover.[nb 3] Rover's prize is Rover's Briefcase the first time the player completes the maze and Rover's Photo the second time. 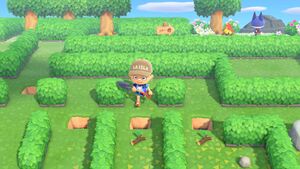 The first layout for May Day.

Added in version 1.2.0, the first layout consists of a singular flat island, mostly covered by a hedge maze containing obstacles, fruit, and crafting materials. The player can jump over the water hole obstacles but only in a straight line, East to West, West to East, North to South, or South to North. The player can remove tree, rock, and bush obstacles using the Shovel with fruit and the Worn Axe that are lying on the ground in the maze or using the Axe that can be crafted from materials found in the maze. The Worn Axe has only enough durability to chop down one tree, while the durability of the Shovel and the crafted Axe last through the entire maze.

The first challenge requires the player to dig up a bush to obtain access to a fruit, then eat the fruit for energy to dig up the tree that is blocking the path forward.

The next challenge requires the player to navigate through the maze, using the Worn Axe to chop down a tree blocking two fruit and jumping several water holes, to gather Wood and Tree Branches needed to craft the Axe.

The next challenge requires the player to navigate further into the maze, using the Shovel with fruit to break rocks and trees to reach a single Iron Nugget, a DIY recipe for an Axe, and the Simple DIY Workbench, where they will craft the Axe.

The final challenge requires the player to navigate through the maze, using the Shovel with fruit or the Axe to remove the remaining obstacles. The player must figure out the path back and forth in the maze, jumping water holes in different directions, to move to end of the maze where Rover waits.

Rover congratulates the player for making it through the maze and offers a prize. The player can then pick up four Bell Vouchers and visit the perimeter of the island, where three rocks are blocking five more Bell Vouchers, which can only be obtained if enough fruit was saved while navigating the maze. 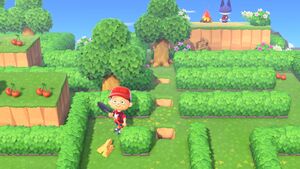 The second layout for May Day.

Added in version 1.10.0, the second layout consists of various rugged terrain, with some items on the second level. Near the entrance of the maze, a Shovel is available for the player to obtain. They need to dig up the nearby bush to obtain a fruit, eat it for energy, and then dig up the tree to go forward.

The player then needs to collect any Wood, Hardwood, Softwood, and any fruits, as well as a DIY recipe for a Ladder if it has not already been learned. After going around the maze breaking rocks and moving trees via fruits in order to collect enough materials, the player can go the Simple DIY Workbench to craft a ladder. From there, the player will need to climb up to where the Worn Axe is, and use it to chop down a tree containing two fruits on a cliff. Using this axe to chop this tree will use up all of its durability and will break.

After collecting the additional fruit, the player must then remove any additional trees using their shovel and eating fruit, as well climbing another cliff to obtain three more fruits. At the end of the maze, the player will need to climb up the cliff to Rover, who congratulates the player for making it to him once again. Afterward, the player can climb down on the left side to obtain four Bell Vouchers and visit the perimeter of the island, where three rocks, which can only be broken if enough fruit was preserved during the maze, are blocking five more Bell Vouchers.