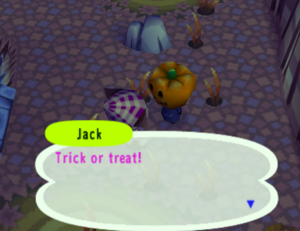 The player speaking to Jack on Halloween in Animal Crossing

In Doubutsu no Mori, Doubutsu no Mori+, Animal Crossing, and Doubutsu no Mori e+, Tom Nook's store sells Candy in preparation for Halloween from October 16 to 30. On Halloween, from 6:00 PM to 1:00 AM, the villagers in the players town wear Jack costumes and will chase the player when nearby. If the player is caught, the villager will ask for Candy; if the player does not give them Candy, they will either change their currently worn clothing into a Patched Shirt, or turn an item in their pockets into either a Jack-in-the-Box or Jack-o'-Lantern.

Jack appears in a random acre and will ask the player for Candy when spoken to. If the player gives him Candy, he gives them an item from the Spooky Series in return; if he is not given Candy, he changes the player's clothing or an item in their pockets. Each time he is spoken to, the player must leave the acre and find him again in another acre to receive another item. Jack can be distinguished from villagers in that he does not chase the player.

Halloween was absent from Animal Crossing: Wild World, but returns in Animal Crossing: City Folk. Unlike the original Animal Crossing, not all villagers go out on Halloween night - those who remain inside become targets for trick-or-treating. Approaching a villager while indoors will result in the villager giving the player Candy, but only if the player is wearing a costume which makes up a Look in GracieGrace. An example of an appropriate Look is the witch's hat and cloak, which are sold throughout August, September, and October, and make up a suitably spooky costume. Costumes don't necessarily have to be spooky, however.

In addition to trick-or-treating indoors, from 6:00 PM until midnight, villagers will chase the player outside upon seeing them, and if the player is caught by villagers outside, they will ask for Candy. If the player doesn't have any on them, the villager will play a trick on the player, resulting in one of the following:

Unlike villagers, Jack will not chase the player, making him easy to distinguish. If Jack is approached by the player without having any Candy on them, he will give out one of four items: a Pumpkin Head, Moldy Shirt, Patched Shirt, or a Jack-in-the-Box. Refusing to give Candy to Jack four times will result in obtaining all four of those items. Otherwise, if the player gives Jack Candy, he will give the player a piece of furniture from the Spooky Series.

Halloween is carried out the same as in City Folk, but with a few extra details. On Halloween night, the player's goal is to scare the villagers in their town. To prepare for this, during the month of October, players should buy masks from the Able Sisters, and Candy from Timmy and Tommy's store. Speaking to villagers during October may reveal to the player what they are scared of. The player may also have the chance to give villagers a piece of Candy in exchange for finding out what costumes scare the other villagers.

On Halloween night (6 PM – 12 AM), the majority of villagers will be in their homes; the rest will be dressed as Jack and will try to trick the player. The player has three tasks they can do:

Jack introducing himself to the player in New Horizons

While initially absent from Animal Crossing: New Horizons, Halloween returned in the Fall Update, with Jack reprising his role as host of the event.

On October 1, Jack sends the player a letter informing them about Halloween; attached is Jack's Portrait. Throughout the month, Candy can be purchased from Nook's Cranny for

120 Bells each once a day[1] and Halloween-themed costumes can be purchased from the Able Sisters. Additionally, villagers can teach the player Spooky Series DIY recipes throughout the month, and special body paint and colored eye contacts can be unlocked by spending

2,400 Nook Miles each.[2] When talking to a villager crafting a recipe that the player had already received, there's a 70% chance that the player will receive five Orange Pumpkins and 30% to receive one Candy.[3] From October 28 to October 31, two Spooky Towers appear outside Resident Services, and some special characters wear the following clothing:

From 5 PM to 12 AM on October 31, outdoor villagers, who are dressed in costumes, will ask for Candy from the player. They may also approach the player when nearby, but they cannot initiate a conversation until the player talks to them. If the player gives a villager Candy, they will give them one of the following items in order:

Jack will also be seen roaming around near Resident Services, and players can give him Candy or Lollipops. Giving him Candy will cause the player to receive the following items:

By giving him a Lollipop, the player is able to receive the following items in order:

Subsequent rewards will be either Jack's Face or Jack's Robe.

Indoor villagers, also dressed in costumes, will give players Candy every five minutes, but only if the player is wearing Halloween clothing, such as the Raggedy Outfit.

Besides being decorative, Jack's Face and Jack's Robe will trick villagers into thinking the player is Jack if both are worn, and the villager will give the player Candy regardless of whether they have already done so. However, each villager will only be fooled once. The outfit will also allow players to not be chased by villagers.

In the Board Game mode in Animal Crossing: amiibo Festival, Jack appears on October 1 and scatters pieces of candy across the town. Throughout the month, players can collect the candy; candy appears floating between spaces in groups of 3 or 5.