This article is about the DIY mechanic in New Horizons. For the crafting mechanic in Pocket Camp, see Crafting.

Sprite for the DIY Recipe app on the Nook Phone

DIY is a feature in Animal Crossing: New Horizons that allows the player to craft or cook items using various materials or ingredients. The player, upon receiving their NookPhone, will be able to find the DIY Recipes app on the home screen. This allows the player to catalog the DIY recipes they receive, as well as the materials in their pockets. This app works with any DIY workbench and allows the player to bookmark recipes, track which recipes they have crafted, and which crafted items are already in their pocket. Starting in the 2.0 Free Update, the player can upgrade the app via the Be a Chef! DIY Recipes+ to enable Cooking and catalog cooking recipes via a kitchenware. Although both recipes will show up in the upgraded app, they will not be able to crafted together; DIY recipes are limited to DIY workbenches and cooking recipes are limited to kitchenware items.

Although there are several varieties of workbenches and kitchenwares that can be used or obtained, all of them function identically and can be used to create any item, with the only differences in these items being size and appearance. 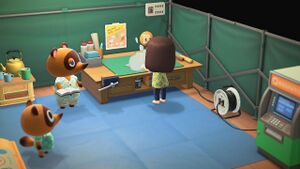 The player using Tom Nook's DIY workbench to crafting something.

Materials, or ingredients, are resources that can be found and used in recipes. The player can obtain these items from hitting rocks; shaking, chopping, or looking around trees; fishing around the player's island or on Mystery Islands or boat tours; from special NPCs; catching with a net; grown by the player; or obtained from other villagers. Additionally, the player can obtain Star Fragments after wishing on a shooting star during a Meteor Shower. These resources can be crafted into items or sold to Timmy or Tommy. There are also seasonal materials that are only available at certain times of the year or during specific events.

Crafted items generally sell for more Bells than the raw materials' total value, however there are some exceptions for consumables such as medicine, and there are Mile Stamps associated with selling certain materials.

DIY recipes allow the player to craft items. The player starts with a handful of recipes from Tom Nook after taking the DIY workshop. As the player progresses, they will encounter more methods of obtaining recipes. Recipes mostly use the natural resources listed above, but some use other items which must be obtained or crafted first. It is possible to learn recipes, such as the Ironwood Kitchenette, which require other crafted items that the player may not yet have found the recipes for. After upgrading to DIY Recipes+, the player can also learn cooking recipes, in which most can be found from villagers cooking in their house or by checking the restaurant daily and talking to the chef in Animal Crossing: New Horizons – Happy Home Paradise.

There are a total of 922 recipes, 783 DIY recipes and 141 cooking recipes, including those only obtainable in Happy Home Paradise.