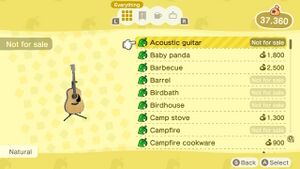 The catalog in New Horizons.

The catalog (known as the Timmy & Tommy shopping catalog in New Leaf and the Nook Shopping catalog in New Horizons) is a feature in the Animal Crossing series that allows the player to view and purchase items they have obtained. It is divided into sections for each type of item, such as furniture or clothing, and items ordered from it are mailed to the player at the next mailing period. Items obtained from certain sources, such as events, cannot be purchased, though they still appear in the catalog; however, some items, mainly downloadable items that cannot be obtained after a certain period of time, do not appear at all in the catalog. 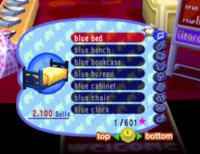 The catalog in Animal Crossing.

In Doubutsu no Mori, Doubutsu no Mori+, Animal Crossing, and Doubutsu no Mori e+, the catalog can be accessed from Tom Nook if spoken to at his store. Items in the catalog include furniture, wallpaper, carpets, clothing, handheld items,[nb 1] stationery, Gyroids, fossils, and music. Items are ordered by number, and the number selected over total number of items obtained is displayed at the bottom-right, with a star appearing beside it if the category is complete. Two furniture items, Ice Climber and Mario Bros, do not appear in the catalog.

The order of furniture items in the catalog differs between Animal Crossing. Additionally, in Doubutsu no Mori, tools do not appear in the catalog. 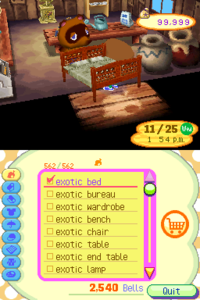 The catalog in Wild World.

Downloadable items, including the Mario Theme, Pikmin, and Blue Falcon, as well as character pictures, do not appear in the catalog.

The catalog in City Folk.

In Animal Crossing: City Folk, the catalog, like in previous games, is accessed from Tom Nook and contains the same item types as Wild World. Numbers are no longer displayed in the catalog, though items are still ordered by number.

If the player transfers over their data from Wild World to City Folk, their catalog transfers alongside their character. For some items this is the only way they can be added to the City Folk catalog as they are otherwise unobtainable.

Downloadable items and distributed items do not appear in the Catalog including Red Headgear, Blue Pikmin and Yellow Pikmin.

In Animal Crossing: New Leaf, the Timmy & Tommy shopping catalog is unlocked when the first upgrade to Timmy and Tommy's store, T&T Mart, is built. It can be accessed via a machine in the store. Items are now displayed in alphabetical order, and specific items can be looked up via a search feature. The Catalog Maniac Bronze, Silver, and Gold badges can be obtained from Phineas after the player completes 20%, 50%, and 80% of the catalog, respectively.

In the Welcome amiibo update, the search feature in the catalog no longer requires an exact match to find items. Also, the player can sell their catalog's contents alongside their town when starting over, which will transfer the value to their new profile.

In Animal Crossing: New Horizons, the Nook Shopping catalog is unlocked when Nook's Cranny is built. It can be accessed via Nook Shopping at the Nook Stop in Resident Services, along with the ABD and Nook Miles rewards. The player can purchase up to five items per day, including other non-catalog Nook Shopping items. Beginning in version 1.5.0, it is possible to hide non-purchasable items in the catalog by pressing the Y button. There is a Nook Miles achievement, titled Growing Collection, that is unlocked after the player adds 100, 200, 300, 400, and 500 items to their catalog.

By ordering 100 items via Nook Shopping, the player can unlock the Nook Shopping app, which allows them to view the catalog anywhere via their NookPhone, as long as they are not currently visiting a dream island. Additionally, beginning in an update on November 19, 2020, the player's catalog can be viewed outside the game via the NookLink mobile app.

Photos and posters do not appear in the catalog. 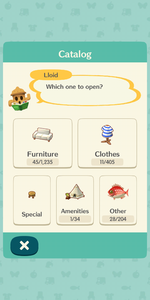 The catalog in Pocket Camp.

In Animal Crossing: Pocket Camp, the catalog is accessed from the menu, and it contains furniture, clothing, special items, amenities, fish, bugs, and flowers. Items are further separated by their collection within their respective categories. Details can be viewed for each item, and unlike in the main series, items cannot be purchased from the catalog.

This page could be improved with the addition of images.
You can help by uploading one or more images and including them on this page.
Retrieved from "https://nookipedia.com/w/index.php?title=Catalog&oldid=1057453"
Category:
Hidden category: