Ice Climber is a furniture item in Doubutsu no Mori+ and Animal Crossing. It can be placed on the surface of tables and other similar furniture that have surfaces for items. The player can interact with this item to play Ice Climber.

Ice Climber can be obtained in a letter from Tom Nook after the player scans e-Reader card N01 at the e-Reader Transfer Machine in the post office. In Doubutsu no Mori+, it could instead be obtained as a bonus gift after transferring a Doubutsu no Mori save file via the Data Moving Service until the service's discontinuation. In Doubutsu no Mori+, Ice Climber can technically be obtained using a secret code using the player's name and town name; however, Nintendo never officially distributed the generator for this game on their website, so it is not legitimately obtainable (a third-party code generator must be used). In Animal Crossing, Ice Climber is not a valid item that a secret code can be created for.

In Doubutsu no Mori+, Ice Climber is modeled after a Famicom rather than a Nintendo Entertainment System. Since e-Reader functionality was removed in the European version of Animal Crossing, this item cannot be obtained in that version without the use of cheats. 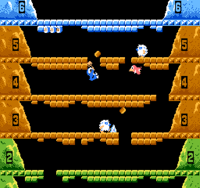 Ice Climber (アイスクライマー, Aisu Kuraimā?) is an platform game originally released on the Famicom in Japan on January 30, 1985, and on the Nintendo Entertainment System in North America on October 18, 1985 and in Europe on September 1, 1986. An arcade version of the game, VS. Ice Climber, was released earlier in North America in October 1984.

The first player controls Popo, while the second player controls Nana. The goal is to reach the top of the level by breaking through layers of ice while avoiding various enemies, which can be defeated or stunned with their mallets. After eight layers, each level has a bonus stage where Popo or Nana can collect eggplants for points. At the top of each level is a condor, which Popo or Nana must jump into to complete the level.

Enemies include Topis, Nitpickers, and White Bears. Topis are yeti-like creatures (seals in the Japanese version) that can fill holes with ice, requiring Popo or Nana to break them again. Nitpickers are birds that can fly between layers. The White Bear only appears if Popo or Nana take too long to move up they mountain; the bear pounds the ice to force to screen to scroll up.

Ice Climber on other wikis