7-Eleven is a chain of convenience stores that partnered with Nintendo to add crossover content to Animal Crossing: New Leaf and Animal Crossing: Happy Home Designer. Various items and one villager, Filly, themed around the store were distributed via Nintendo Zones at 7-Eleven locations in Japan.

10 more 7-Eleven items were added in the Welcome amiibo update and are available for purchase from Filly's RV, which would appear in the campground after being distributed via 7-Eleven stores from November 4, 2016 to January 5, 2017, and from March 2 to May 6, 2018. In addition to the 10 new items, the 10 original items are available from Filly's RV.

In Happy Home Designer, they are used as a decoration item. They can be obtained when the player unlocks the Shop. 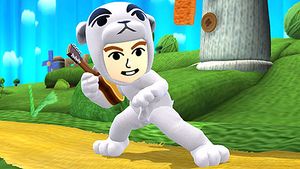 For a limited time in Japan, a K.K. Slider Mii costume for Super Smash Bros. for Nintendo 3DS / Wii U was available at all available 7-Eleven stores from June 19, 2015 to July 11, 2015. International players received the costume separately for free on July 31, 2015.