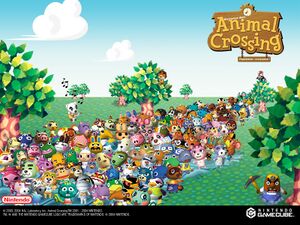 Wild World features 150 villagers in total, the fewest of any game in the series (6 of which were distributed at Nintendo DS Download Stations and are no longer legitimately obtainable). The game introduces 18 new villagers (17 have appeared in all mainline games since) as well as one new animal species (monkey, the 6 members of which were also the 6 distribution-only villagers), but excludes 188 villagers from previous games.

City Folk features 210 villagers in total. It introduces 18 new villagers (all have appeared in all mainline games since) and sees the return of 42 of the villagers absent from the previous game.

New Leaf features 333 villagers in total. The game introduces 100 new villagers (all have appeared in all mainline games since), two new animal species (deer and hamster), two new personalities (smug and big sister), and sees the return of 24 previously absent villagers and the exclusion of 1 villager (Champ).

Happy Home Designer, a spin-off title, features 339 villagers in total, based on the initial New Leaf roster. It introduces 2 new villagers and sees the return of 4 previous villagers (5 of which were distributed as downloadable content and are no longer legitimately obtainable). 20 villagers from Animal Crossing and Doubutsu no Mori e+ exist in the game's files but do not actually appear in the game. They were ultimately added to New Leaf with the Welcome amiibo update, which was released after Happy Home Designer.

amiibo Festival, another spin-off title, features all of the same villagers as New Leaf, except for those introduced with the Welcome amiibo update.

The Welcome amiibo update for New Leaf features 399 villagers in total. It adds 66 villagers to the game: 14 new, and 52 returning. All 6 villagers exclusive to Happy Home Designer return in this update. Two of the villagers, Filly and Holden, were distributed as Japan-exclusive DLC visitors to the campground and are no longer obtainable. These two characters are not able to live in a player's town, however, making for a total of 64 possible new residents to the player's town.

Pocket Camp features 341 villagers in total. 40 were available in the initial release of the game, with the rest being introduced in updates.

Character names in italics denote Japanese-exclusive villagers whose names have not been localized in other regions.