Icon for a DIY recipe

Icon for a cooking recipe

DIY recipes appear in Animal Crossing: New Horizons and allow the player to craft certain items through the DIY mechanic. Once a player acquires and learns a recipe, they are able to bring the specified materials to a DIY workbench to create the item. Cooking recipes are also available since 2.0 Free Update, and allow the player to cook food items once they learn the Be a Chef! DIY Recipes+ item and can cook the recipe using a kitchenware item.

The player starts with a handful of recipes from Tom Nook after taking the DIY workshop. As the player progresses through the game, they will encounter more methods of obtaining recipes.

Most recipes require natural resources (such as wood, iron nuggets, and stone), but some use other items which must be obtained or crafted first. It is possible to learn recipes, such as the ironwood kitchenette, which require other crafted items that the player may not yet have found the recipes for. 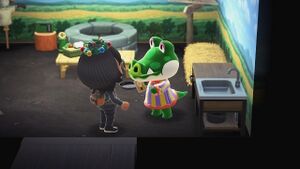 Getting a cooking recipe from a villager

Throughout the rest of the game, there are several ways to obtain recipes:

It is common to encounter recipes multiple times on the same island, and sometimes from the same villager, even if there are other recipes in the game that have not been encountered yet, with villager dialogue explicitly encouraging sharing the previously-learned recipe with other players. A DIY recipe that the player already knows cannot be learned again, but can be dropped or gifted for other players or sold/trashed. All recipe cards sell for 200 Bells each.

Visiting another player's island can result in the villagers on that island giving them gifts which could include recipes.

A list of all DIY recipes in New Horizons can be found here.

Certain DIY recipes can only be acquired during specific time periods within (or mostly within) a specific season.

Certain DIY recipes can only be acquired during a specific time period around a certain event.

Villagers may be found crafting inside their homes. Speaking to them while crafting will result in the villager providing the player with a DIY recipe. Moreover, if the player scans an amiibo card to invite a villager to the island's campsite, the villager in question might ask the player to craft a certain item. If the player does not yet have the DIY to craft that item, the villager will give the player the needed DIY.

The personality-related recipes may also appear in a Message Bottle on the beach.

During the main storyline, the Resident Representative will be given recipes for construction kits needed for two pieces of infrastructure. Both recipes are single-use only and are removed from the recipe catalog once used. Only one campsite may be built. Additional bridges can be built once Resident Services upgrades to a building; for these the player will given the necessary kit upfront. These recipes are not seen again afterwards once the player has completed those tasks.