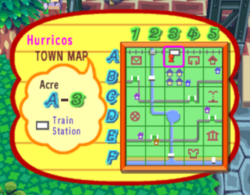 A town map in Animal Crossing, with marked acres.

Acres are grid elements measuring 16x16 spaces in the player's town. Each game in the Animal Crossing series arranges these preconstructed acres in novel ways to generate thousands of different possible town layouts. In all games prior to and including Doubutsu no Mori e+ there is an explicitly designated acre system viewable from the map screen. Subsequent titles (up until Animal Crossing: New Horizons) removed the explicit acre system in favor of an open and scrolling rounded-world design, although the acres are still used to determine perfect town status (Animal Crossing: New Leaf being the exception). 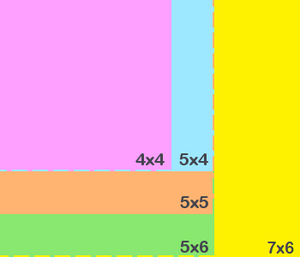 Graphic comparing the acre count of each Animal Crossing title.

Every time the player moves into an acre (with the exception of a player exiting their house upon loading the game), one fish and one bug spawn at the locations programmed within the acre data. The bug and fish within the acre disappear upon moving six squares away from that acre. Bugs cannot move outside of an acre; should a Banded Dragonfly fly outside of the acre it will fly up and disappear. However, fish can move with the river current and end up in the next acre. The bug and fish that appear in the acre are determined by their rarity.

Animal Crossing: Wild World is the first game in the series to feature a scrolling rounded-world design. Each town is made up of only 16 acres (four across and four down), giving Wild World the smallest town map of any game in the Animal Crossing series. Explicit acre boundaries do not exist, but they are still used in the game's code to determine perfect town status.

Fish and bugs no longer spawn upon entering an acre, instead they appear in designated spawn locations out of viewing range of the camera. Up to one bug or fish may appear in a given spawn location at a time, however unlike previous games in the series, there is a not a 100% chance of a bug or fish appearing in each acre. A bug or fish's rarity also affects the likelihood of its appearance.

Animal Crossing: City Folk maintains the open, rounded-world design introduced in Animal Crossing: Wild World. Each town is made up of 25 acres, five across and five down, making it the third largest of any game yet released. The acres are not explicitly marked but again are used to determine perfect town status. The game also introduces a new city plaza accessible via the bus stop.

City Folk also uses many of the same bug and fish spawning procedures as seen in Wild World, though fish are now capable of spawning within the viewing range of the camera as well as outside of it. Bugs, however, remain the same in that they always spawn outside of viewing range.

Animal Crossing: New Leaf features a 20-acre town map, five acres across and four down. This places it in between the sizes of the Wild World and City Folk maps. The game also features additional map areas such as the sea to Tortimer Island, Tortimer Island proper, the Main Street and the four parts of the Happy Home Showcase.

The acre system in New Leaf has all but disappeared, as villager homes, town projects, buildings and the player's house can be built anywhere, regardless of acre boundaries. Even perfect town status no longer relies on tree counts in individual acres, instead using an overall tree count as well as requiring an environmental rating based on public works projects. Bug and fish spawn spots remain the same as they did in City Folk, however, with the same style of spawning.

New Horizons features the largest town map so far in the Animal Crossing series, a 42-acre map measuring seven across and six down. Just like in Animal Crossing, the acres are clearly marked and labeled on the map. Columns are labeled 1 through 7 and rows are labeled A through F, A being the northmost row and F being the southmost row. The airport and pier always generate on the F row. Unlike previous games, cedar trees can grow on any acre, not just the two northernmost acres. The bugs and fish spawn similarly to how they did between Wild World and New Leaf.

This page could be improved with the addition of images.
You can help by uploading one or more images and including them on this page.
Retrieved from "https://nookipedia.com/w/index.php?title=Acre&oldid=1057551"
Categories:
Hidden category: