In Animal Crossing, each town starts with six villagers, one of each personality type. There is a maximum of 15 villagers in a town.

The events of villagers moving in and out occur exclusively during the orange-text loading screens. As a result, there is no unpacking or packing up event for the player to witness. Villager houses simply appear and disappear.

Once the first player has settled in to their house at the beginning of the game, new villagers will begin to "naturally" move in to the town.

There is a chance for a new villager to move in each time the player's town is loaded, after the player chooses their name at the game load screen. Several criteria must be met:

Certain villagers cannot be starting villagers in the player's town, instead having to move in later. These include all anteaters, kangaroos, and ostriches, as well as Coco, Genji, Kabuki, Lucky, Octavian, Ribbot, Rizzo, Snake, Stinky, Tiara, Velma, and Woolio.

Once the maximum of 15 villagers is reached, villagers will begin to "naturally" move out at a regular interval to make room for new villagers. Unlike in later games, villagers do not let the player know they are leaving, and they do not pack up. When a villager moves out, they send the player a goodbye letter.

When the town is loaded, a villager will move out if at least 10 days have elapsed since the last villager moved out. When selecting the moving villager, the game tends to favor villagers who have seen the least interaction with the player who was chosen at the game load screen.[nb 1] Additionally, villagers who moved in naturally will be picked before villagers who moved in from a town on another memory card.

Each time a villager moves out in this fashion, a new villager instantly moves in, during the game load screen.

When speaking to villagers, there is chance they will say that they are considering leaving town. Their fate is then left for the player to decide, who is presented with the choice of asking the villager to stay or encouraging them to leave.

In Doubutsu no Mori e+, the method of determining who moves out naturally is different from Animal Crossing. The game initially chooses the villager who has gone the longest without speaking to a player; if the length is the same between all villagers, a random villager from the town's most populous personality type is chosen; if all personality types are equal, the villager with the lowest friendship between all players is chosen; if all villagers have the same friendship between all players, a random villager is chosen.

If a villager is invited to move in via their e-Reader card while there are 15 villagers living in town, one will move out to make room using the same checks as if they were to naturally move out. 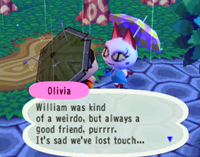 Olivia recalling a player from her previous town

Villagers who move from one memory card to another retain certain memories of their life in their previous town. Notably, this includes the name of the town, the names of the town's four player characters, and the town's Tune. When spoken to, these villagers may occasionally mention the name of one of their past town's players, express their good friendship together, sing their past town's Tune, and lament about losing touch with that player.

In Animal Crossing: Wild World, each town starts with three villagers. Over time, more move in until the maximum of eight is reached.

The six monkey villagers—Champ, Elise, Monty, Nana, Simon, and Tammi—can only move in after being distributed from DS Download Stations via Tag Mode. This was the only way for them to move to the player's town. When received by the game, the villager instantly moved in and a Note in a Bottle containing a message from Katrina; if there were already eight villagers in the player's town, the villager would be added to a queue and would move in when another one moves out.

Once the maximum of eight villagers is reached, a random villager who is in-between hobbies[clarification needed] will pack up their furniture in boxes. During this time, the player can ask them not to move, which may convince them to stay. Otherwise, the next day, the villager will move out and send a goodbye letter to the player.

When a villager moves out, they are added to an internal one-villager queue where they can move to other another player's town via multiplayer.

Friga preparing to move out in Animal Crossing: City Folk

In Animal Crossing: City Folk, each town starts with six villagers—one of each personality type. Over time, more move in until the maximum of ten is reached.

The seventh, eighth, and ninth villagers move in over the next three days, and the tenth and final villager moves in up to a week after the ninth. When a villager moves out, their house is removed and a villager with a personality the town lacks or has the least of moves over a signpost within seven days.

Certain villagers cannot be starting villagers in the player's town, instead having to move in later. These include all anteaters (with the exception of Antonio), kangaroos, monkeys, and octopuses, as well as Agent S, Ankha, Big Top, Coco, Genji, Gigi, Kabuki, Kid Cat, Knox, Lucky, Marcel, Ribbot, Snake, Sterling, and Stinky.

Once the maximum of 10 villagers is reached, a villager will approach the player and ask them if they should move out.[nb 3] If they are not persuaded to stay, they will pack the furniture in boxes five days later and move out two days after that, and then they will send the player a goodbye letter.

When a villager moves out, they are added to an internal one-villager queue where they could move to other another player's town via the Nintendo Wi-Fi Connection or WiiConnect24 before the services' discontinuations in 2013 and 2014, respectively.

In Animal Crossing: New Leaf, each town starts with five villagers, which can be any personality except smug and big sister. Over time, more move in until the maximum of nine is reached.

Once there are nine villagers living in the player's town, no more can move in naturally; a tenth villager can move in through one of the four methods detailed below. When a villager moves out, their house is removed and a villager with a personality the town lacks or has the least of moves in at a random location within seven days.

Once the campsite is built, villagers will appear occasionally there, where they can be invited to move in after the player wins a game with them.

In the Welcome amiibo update, the player can scan a villager's amiibo card to have them move in. This is the only way for the villagers added in the update to move in.

In Animal Crossing: New Horizons, two villagers—one jock and one big sister—move to the deserted island with the player, and there is a maximum of ten villagers.

The first house plot is always claimed by a lazy villager, the second a peppy villager, and the third a normal villager.

Once a plot is placed for the campsite villager, the Resident Representative gains the ability to purchase Housing Kits for 10,000 Bells each. Up to ten houses can be on the player's island. If there is an empty house plot and a villager is not invited via one of the four methods detailed below, a random villager of a personality the island is lacking will move in each day. Each move-in until all ten plots are first filled will reward the Resident Representative with 1,000 Nook Miles.

After the initial campsite visitor moves in, villagers will appear occasionally at the campsite, where they can be invited to move in after the player wins a game with them. If there are ten villagers living on the island, the camper will choose a random resident to replace, and the player can choose to accept or reject them. The chosen resident will be locked until the villager leaves the campsite.

If a villager's amiibo card is scanned at the Nook Stop in Resident Services, they will instantly appear at the campsite. When spoken to, the villager will ask the player to craft them an item. If the player brings the requested item, then invites them again on two other days[nb 4] and brings them their requested items, they ask the player if they should move in. If there are ten villagers living on the island, the player can choose a resident for the camper to replace.

Inviting via amiibo is the only way for the Sanrio villagers to move to the player's island.

If a villager on another player's island is moving out, the player can persuade them to move to their island if there is an open house plot. After the third conversation with the moving villager, they will call up the player's Resident Services and purchase an open plot.