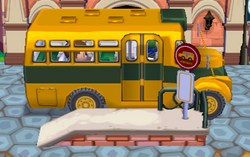 A player on the bus at the bus stop

The bus is a transportation system to the city in Animal Crossing: City Folk. It is driven by Kapp'n, who also drives the taxi in Wild World and the boat in Animal Crossing and New Leaf. It is styled after a typical North American school bus - yellow with (usually) a green line going around the bus.

The inside of the bus

When starting the game for the first time, the player is on the bus talking to Rover while Kapp'n whistles a tune in the background. During this chat, the town name is determined as well as the player's gender and facial appearance, which are decided by how the questions are answered. After this, Kapp'n interrupts Rover and alerts the two that the bus is shortly going to arrive at the town, where the player is dropped off at the bus stop in front of the checkpoint.

The player can take the bus to the city free of charge by going to the bus stop in front of the checkpoint once they have finished working part-time for Tom Nook. The bus can be accessed at any time except during online multiplayer, when working for Tom Nook, or when a villager, snowball, or snowman is blocking its route. During trips to the city, Kapp'n will make small talk to the player that varies based on their gender. If the player is female, he will subtly flirt with them, calling them "cute", "pretty" and telling them that a "manly bus-driver is available", and if they are male, he will talk about women, the city, and modern-day "youngsters". If there is no response, he will whistle to himself until the 'A' button is pressed to reveal the next part of the dialogue. The tune he whistles is the same tune as the one playing on the radio in the Animal Crossing: Wild World taxi at the start of the game and the sea shanty he sings while going to the island in Doubutsu no Mori+, Animal Crossing, and Doubutsu no Mori e+. Inside the bus is a large drawing of Lyle on the back of Kapp'n's seat and a small model of Kapp'n sailing on a boat as he did in Animal Crossing. Additionally, an animated bus appears on the loading screen when going between areas.

From May 5 to May 19, 2009, Nintendo distributed a Bus Model furniture item in celebration of Teacher Appreciation Week to players who were connected to WiiConnect24.

In Super Smash Bros. for Wii U, the bus appears when the stage, Town and City, transitions to either the city or to the town. It also appears as a trophy. 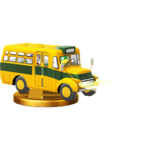 Bus to the City

Kapp'n and the bus appear as an Assist Trophy in Super Smash Bros. Ultimate. Upon being summoned, Kapp'n will get in his bus and drive around stage, sometimes making the bus jump. Should the bus make contact with a fighter, he will put them in his bus, and drive toward the edge of the screen, KO'ing the fighter in the bus if they don't jump out in time.