Donations to the town fund are not cumulative, meaning any Bells donated in excess (e.g. should the player donate 210,000 Bells at once for the bridge) will be lost and will not be put forward to the next attraction (e.g. 10,000 Bells will be lost).

A Stone Bridge over a river

Once the player has donated 200,000 Bells to the town fund, there will be a notice on the Bulletin Board the next day asking residents to vote on the location of the new bridge to be built. Pelly or Phyllis will ask the player which location they wish for the bridge to be placed using locations circled on the town map she shows to them. There will be either two or three choices given, and they may be very close to existing bridges. This is done once the player has clicked 'Town Fund' (Labeled 'My Account' when Phyllis is working) when talking to either one of them in the Civic Center window. The location voted for may not win the majority of votes, so the player should not feel discouraged if the bridge is built in an area they feel is not right. Pelly and Phyllis will mention it is in the process of being built when they are talked to.

The bridge takes a week to build. Once built, Tortimer will be seen walking around the new bridge on the day of completion. Upon talking to him, he will say:

"Good news, <Player>! Our new bridge is finally finished! And today's the opening ceremony! However, since we spent all our funds on the bridge, we have none left over for a proper celebration. So, we'll just have to use our imaginations and pretend there are balloons and streamers and such. But giddy laughter is free, so please--drink deep from that well! Like so. Heh heh heh HORF HORF!"

The town fountain with Tortimer in the foreground.

Once the player has donated 600,000 Bells to the town fund, a fountain will be built. The player will be told of the plans the following day when talking to Pelly or Phyllis, so they should not expect a response about the donation until the next day. The fountain can be used to attempt to receive a silver or a golden axe, by throwing a plain axe into the fountain and talking to Serena. There is no vote for the location of the fountain, it is placed just outside the Bus Station on the concreted area. It resembles the fountain found in the city.

Like the bridge, it takes seven days for the building work to be completed. Tortimer will be standing in front of it on the day of completion (preventing axes from being thrown into it), and upon talking to him will say such things as;

"You DO know you can't drink the water in the fountain, don't you, sprout?"

"Throw a coin in the fountain, <Player>! We could use the revenue! Heh heh horf!"'

"<Town> sure has seen a lot of improvements since I first became mayor. Never let it be said that Tortimer ignores the little guy!" 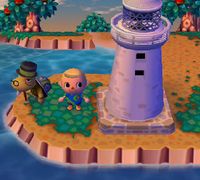 A lighthouse, with Tortimer nearby

Once donating a further 1,000,000 Bells to the town fund, a windmill OR lighthouse will be built, depending on which one wins enough votes by the town people. Either of the two appear by the shoreline, on noticeable peninsulas in the land. They serve no purpose, and only exist as a decoration and cannot be entered - rumor has it that the windmill increases the beauty of the town, while the lighthouse improves the appearances of rare fish, neither have been proven true by Nintendo, and community testing suggests this is a myth.

It takes seven days to build and will be mentioned on the town bulletin board about the donation. Once built, Tortimer will appear nearby for an opening ceremony, and may say such things as:

"That lighthouse doesn't just light the coast for ships. It also lights up the hearts of the people of <town name>. Or something like that."

If the player wishes to switch the Lighthouse for a Windmill or vice versa, donating another 1,000,000 Bells to the town fund allows this option unlimited times with the usual price and day stipulations each time.