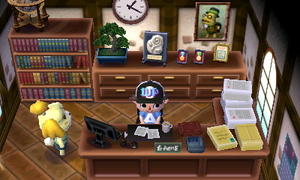 The Mayor with Isabelle

The mayor is the character or player that has more control over a town, or an island, in the Animal Crossing series. The title is held by Tortimer starting in Animal Crossing and lasting until New Leaf, in which the role of government is taken by the first player to move in town, known as the Resident Representative.

The role of mayor was introduced in Animal Crossing, in which it was held by Tortimer. Tortimer is present at town events, where he hosts competitions or gives the player special items. In Animal Crossing: Wild World and Animal Crossing: City Folk, the player can also see the mayor at his desk in the town hall when events were not being held.

In Animal Crossing: New Leaf, Tortimer has retired from the position of mayor, and the first player to move into town assumes the role, assisted by Isabelle. The mayor player has a larger influence on the development of the town and can enact ordinances and begin the construction of public works projects.

Isabelle replaces Tortimer at many town events, where she gives the player commemorative items.

In the Animal Crossing: New Horizons storyline, the player's island is overseen by Nook Inc. and Resident Services staff rather than having a traditional civic government. Therefore the position of mayor does not exist, and Tom Nook presides over most island ceremonies. However, the first player to move onto the island is named Resident Representative, which in practice has very similar powers to the mayor in New Leaf, including the ability to initiate and place infrastructure such as stores, bridges, and inclines. While there is no direct equivalent to ordinances in New Horizons, the Resident Representative can also now control the number (up to 10) and location of villager housing plots.

The player as mayor (New Leaf)[edit] 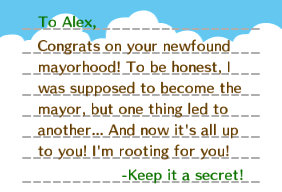 When the first player moves into a town in New Leaf, they will be greeted by Isabelle and the villagers, who address the player as the mayor. Even if the player protests, they will be placed in the role, and will later receive a letter from the intended mayor regarding the position. In order to perform mayoral actions, the player must first acquire a developer's permit; they may get the permit by registering as a town resident and earning a 100% approval rating. 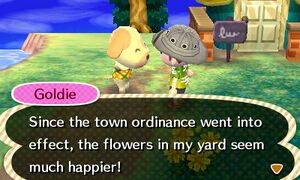 Using one of four ordinances, the mayor can change aspects of their town; they may choose from the Keep Town Beautiful, Early Bird, Night Owl, and Bell Boom ordinances. Each ordinance costs 20,000 Bells to begin and can be ended free of charge.

The mayor may start a public works project to add new features in their town, including new buildings and attractions. After selecting a project to work on, Lloid will accept donations from the player and the town's other residents to fund the construction. The player may also demolish projects (with exceptions) for 10% of their original cost and attend a completion ceremony for each completed project.