This article is about the gameplay mechanic. For the building in New Leaf, see Dream Suite.

A player entering a dream in Animal Crossing: New Horizons

A dream is an online feature in Animal Crossing: New Leaf and Animal Crossing: New Horizons that allows players to visit other dream towns (dream islands in New Horizons). Unlike regular town visits, some areas (like Main Street or town hall) are inaccessible and the player cannot take any items from this town (if they are lying on the ground). In both games, Luna will hold onto the items that were in the player's pockets prior to dreaming, and will return them once the player wakes up.

While initially absent from Animal Crossing: New Horizons, dreams were added in the 1.4.0 Free Summer Update Wave 2. Unlike the previous game, the player can sleep on a regular bed rather than in the Dream Suite, which does not exist in New Horizons. Dreams may only be accessed if the bed that the player sleeps on is in their own house, and if the airport gates are closed. 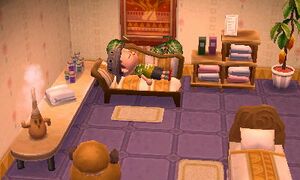 Once a day, the player can share a dream of their own town with other New Leaf players by lying down on the couch. Luna will ask the player whether or not custom designs from the town can be taken by visitors; if the player allows this, Wendell will appear in dreams of the town to provide the designs to dreamers. Luna will then tell the player their town's Dream Address and pay the player 5,000 Bells.

Before Welcome amiibo update, a Dream Address consisted of 12 digits; however, after update they now contain hexadecimal values. All towns shared before this update were removed.

After the player's tent upgrades to a house, the player can share a dream of their own island once a day with other New Horizons players by lying down on any bed in their own house. Dream Addresses are prefixed with DA and follow a similar format to the Dream Addresses from New Leaf (12-digit number). The player's Dream Address is added to their island map and passport once the dream is initially uploaded. After the dream's initial upload, and upon each subsequent update to the dream, Luna will mail the player a Dream Exchange Bell Ticket the following day, which can be sold at Nook's Cranny for 5,000 Bells.

Besides updating their dream and visiting other dream islands, the player can either delete the dream or set the dream to private, so that the Dream Address does not appear on the player's map or passport. Dreaming cannot be accessed when in multiplayer. 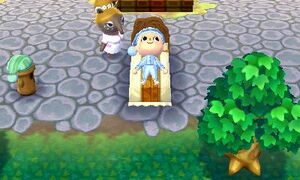 A player entering a dream in New Leaf

The dream begins with the player waking up in the bed, which has been transported to the dream town's plaza. Luna stands next to the bed until the player chooses to wake up. Players can freely borrow tools like a shovel and axe from Lloid to use within the dream. If the player lies on the bed a second time, they will leave the dream and anything they have in their pockets will be lost.

The player who uploaded the town can be found walking around. When spoken to, they will say their recorded greeting. If a villager that lives in the player's town also lives in the dream town, that villager may comment on how "it's nice that at least you're here!".

Several areas cannot be accessed from within a dream, and houses are the only buildings that can be entered. If the player attempts to go inside Re-Tail, a notice on the door says "Temporarily closed forever.", while The Roost's sign reads "Closed 24 hours.". The town hall is similarly locked, with a notice stating "The town hall will be closed today. Thank you for your understanding!" Main Street is also inaccessible as the level crossing barriers are permanently closed, and the campground is similarly barricaded from being accessed. The bulletin board only displays the town's name and Dream Address, with no other notices being shown.

Custom designs on display in the town, such as on the ground and within houses are always visible. If the player who uploaded the dream chose to allow sharing of their custom designs, Wendell can be found roaming the town and will provide a selection of these designs for the player to copy.

Upon returning from a dream randomly chosen by Luna, the player has the option to tell Luna that they had a nightmare. This will prevent Luna from sending the player to that town again. 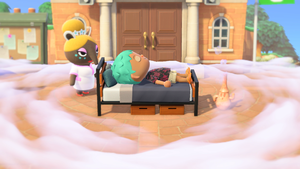 A player entering a dream in New Horizons

When the player wishes to dream, Luna will ask them to provide a Dream Address or choose to visit a random island.[nb 1] Unlike the previous game, there is no charge for this service so dreaming is free in New Horizons. If the player tries to input their own Dream Address, Luna will reject it, stating that she cannot guide the player to their own island "any more than [she] can divide by zero."

Unlike in New Leaf, the player will not change into pajamas before dreaming, and will continue wearing the clothing that they had on beforehand. Clothes from Wand transformations cannot be worn as Luna also takes away the Wand, and must be taken off before dreaming. Beginning in the 1.5.0 Fall Update, players are able to view a list of dreams they have visited before.[1]

While dreaming, the player may walk around the island and perform actions just as they would in the real world, but their actions will have no effect on the island. As in the previous game, the player will awaken on the bed having been transported to the dream island's plaza. Luna stands next to it until the player decides to wake up, holding an umbrella if it is raining. If the player lies on the bed a second time, they will leave the dream and anything they have in their pockets will disappear.

Lloid does not appear on the dream island unlike in New Leaf and thus the player cannot borrow tools. However, players can leave tools on the ground or on placed objects for the visiting player to pick up while on their dream island. Replacing the functionality of Wendell from New Leaf, the plaza contains a design kiosk that allows the player to browse the island owner's custom designs, including Pro Designs, and take them out of the dream.

Villagers living on the island can either be found inside their houses or wandering around the island. When spoken to, they will provide different dialogue then in the real world, often making jokes on the fact the player is dreaming. All players on the island can also be found wandering around, and when spoken to, they will reference the message in their passport, or if none is set, greet the player with a general "Welcome!"[2]

During a dream, the NookPhone apps work differently, with only the Camera, Map, Chat Log, and Best Friends List retaining full functionality. The Custom Designs app will allow the player to wear their designs, but not edit or display them. If the player tries to call Rescue Service, the Operator will note the "Strange tunnels" and can only drop the player off at the plaza as a result. The Operator will not charge the player due to them not being able to choose where to be taken, though the Operator will complain about this. All other apps are completely unusable.

While dreaming, the player cannot learn DIY recipes, and any items that are picked up will not be cataloged. They also cannot enter Nook's Cranny or Able Sisters, and the message, "Due to unusual circumstances, we will be closed today." will be displayed if the player tries to enter either shop. The Airport can be entered, but Orville will simply tell the player to enjoy their visit, and will not offer to fly them to other islands or allow them to use the card stand. However, the museum still functions normally and as if the player were in another island's museum online.

If the player feels that the dream island violates Nintendo's terms of service this can be reported with the minus button, which will prompt Luna to immediately wake them up.

Several dreams have been created by or in affiliation with Nintendo and have been promoted as "official" towns for players to visit.