Wendell is a walrus in the Animal Crossing series. He has slightly different roles in each game appearance, ranging from wallpaper salesman to traveling artist, but they all revolve around his artistic ability and design skills. His extreme hunger may be a reference to the phrase "starving artist."

He wears a sleeveless shirt that does not cover his large, round stomach, which has a small cross for a belly button. He always carries a canvas and a traveler's backpack with him. Starting in New Leaf, Wendell wears beige pajamas and a nightcap.

Wendell likes sleeping (explaining why he always closes his eyes, and wears pajamas and a nightcap starting in New Leaf) and eating (explaining why he is always fat). Due to being a traveling artist, he also likes rewarding the player with different kinds/types of wallpaper and designs/patterns upon getting fed by the player, traveling, and painting. He even likes copying other patterns from the town residents all while dreaming in New Leaf.

In Animal Crossing, Wendell gives the player wallpaper in exchange for specific food. He will show up in the player's town on a random weekday; Copper mentions his arrival date up to two days in advance and gives his exact acre when he is in town. Upon being talked to, he will tell the player he is hungry and will ask for food, prompting the player to give him an item. If the player successfully guesses his favorite food, Wendell rewards them with an exclusive wallpaper. He accepts any item, even items that are not food; however, he only rewards the player if he is given his favorite food. In Doubutsu no Mori, Wendell only eats fish.

Wendell's role in Wild World is different than it is in the previous installments. This time, he gives out unique designs. Upon giving him something to eat when he visits the town, he gives a pattern that is unobtainable anywhere else. He will eat anything, but a pattern can only be acquired by feeding him fruit, turnips, acorns, and fish. Giving him any type of fruit will yield a pattern already obtained, except coconuts, which yield a different pattern. He does not appear on Sunday or Saturday anymore. Instead, he appears from 6 AM to midnight on a random weekday (excluding the day Redd comes). In Wild World, Wendell comes from Tuskany. When one of his designs is displayed at Able Sisters, it will say Wendell from Tuskany. Tuskany is a pun involving the region of Tuscany, Italy and tusks, which are a predominant feature on walruses. Wendell is the first step in the Golden Axe Trading Event.

Wendell has the same role in City Folk as he did in Wild World, excluding the Golden Axe Trade Event and Redd (who now has a store in the city). If the player puts Wendell's designs on display at Able Sisters and asks to receive one of them, Mabel says: "That design is made by Wendell from Sumware," which is a pun on "somewhere."

A full list of his designs in City Folk can be found here.

With WiiConnect24 enabled, he may give out designs on behalf of Nintendo as distributed designs, saying something along the lines of "I made this new design, and wondered what you would think..."

In Animal Crossing: New Leaf, Wendell appears in Dream Towns distributing the custom designs from the town residents. His appearance is changed; he now wears a nightcap and pajamas. Owners of the town can choose not to let him appear if they wish.

Although initially absent, Wendell was added in the 2.0 update of Animal Crossing: New Horizons, as one of the many visitors to the Roost should the player invite him by using his amiibo card. He still wears his pajamas from the Dream Towns in New Leaf; he attributes this to rushing out of bed and forgetting to change his clothes. In addition, Wendell's poster can be obtained from Nook Shopping after inviting him to Photopia via his amiibo. 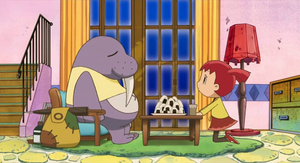 Wendell in Gekijōban Doubutsu no Mori.

Wendell briefly appears in 🎬 Gekijōban Doubutsu no Mori. Ai finds him on the beach, exhausted from hunger. She takes him to his house to eat. After he is finished, he disappears without warning.

Wendell appears as a trophy and a sticker, and can be seen in the Smashville stage.

Wendell appears as a trophy and can be seen in the Smashville stage again. He now also appears in the Town and City stage.

Anything is delicious to a hungry belly. 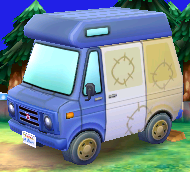 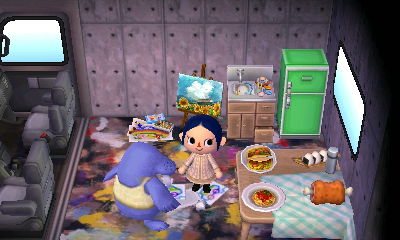 Anything is delicious to a hungry belly. 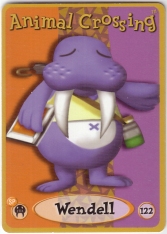 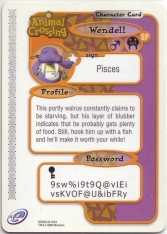 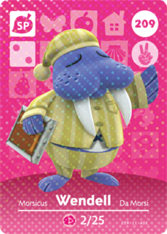 This article needs to be rewritten.
Please help improve this article if you can. Relevant discussion may be found on the talk page (tagged on October 6, 2020).
Further details: Poor writing throughout

This article needs to be rewritten.
Please help improve this article if you can. Relevant discussion may be found on the talk page (tagged on October 6, 2020).
Further details: Poor writing throughout
Retrieved from "https://nookipedia.com/w/index.php?title=Wendell&oldid=1070009"
Categories:
Hidden categories: