"Welcome to the <town name> post office! What can I help you with today?"
— Pelly, Animal Crossing: New Leaf

Pelly is a white pelican, just like Pete, another pelican. She has a large tuft of hair with four leaf-shaped hair strands. Her oval-shaped eyes are black with each one eyelash sticking out of each eye. Her beak and legs are orange. Her beak's upper part is also her nose with brownish-pink linings and dark-purple insides. Her round cheeks are pink with light-pink linings. Her inner mouth is dark-purple. She wears a purple dress with a reddish-pink vest and big white puffy sleeves, and a large white ribbon.

Unlike her sister, Phyllis, Pelly is cheerful and appears to enjoy her work.

Pelly has the same role in Animal Crossing: Wild World as she did in Animal Crossing, where she will send and save letters for the player. She now lets the player edit the Town Tune. Pelly has a secret crush on Pete, the mail worker. She will sometimes sigh about Pete, and she may tell the player her story. She writes on the town bulletin board about happenings, birthdays, and her own anonymous thoughts. She can be found enjoying coffee in The Roost an hour before her shift on random days. The player can get Pelly upset; after the player shoots Pete from the sky and becomes friends with him, Pelly will give the player a "talk."

Pelly's Pic can be obtained after the player saves 100,000,000 Bells in the bank account. The picture quote is "Always remember the Boondoxians." Pelly has an ongoing job to better the Boondoxians, poor, inept villagers in a town.

Pelly still works the same shift at the town hall in Animal Crossing: City Folk. However, she can now fix problems for the player, such as the chance the player is locked out of their own house or if there is a problem with the player's villagers' clothes or catchphrases. She does not handle banking anymore, as that is now part of the ABD (Automatic Bell Dispenser). Her writing on the bulletin board remains, and she still has a crush on Pete.

Pelly can be seen in the Roost sometimes before her shift in the town hall. She can be found from 6:00 AM to 6:59 AM, waiting for her shift. Pelly will often say that Phyllis is not as mean as she looks.

In Animal Crossing: New Leaf, Pelly once again works at the post office, which is now located on Main Street, separate from the town hall. As in the previous games, she works in the early hours of the day, and she retains her cheery mood. However, unlike past entries in the series, she no longer announces special events and daybreak, giving the task to Isabelle instead.

Pelly appears in Animal Crossing: Pocket Camp as the host of the garden event Pelly's Flight of Passion, in which the player must plant Bleeding Hearts in order to attract heartbeetles. If the player catches a certain amount, Pelly will reward them with gifts.

Pelly appears in 🎬 Gekijōban Doubutsu no Mori, where she serves as a supporting character. She helped Ai when she first came to Animal Village. She can also be seen stopping Tortimer from surfing in the summer and looking at Gulliver's crashed U.F.O. behind a tree with Phyllis. 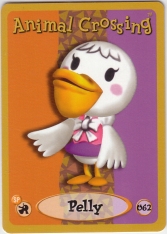 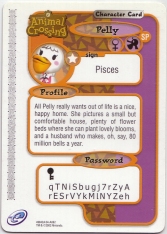 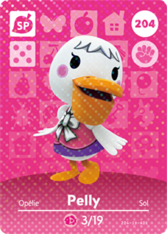