A series of Animal Crossing amiibo figurines, including Isabelle, K.K. Slider, Tom Nook, Mabel, Reese, Cyrus, Lottie, and Digby, were released alongside the game. Blathers, Celeste, Kicks, and Mr. Resetti were released later in a second wave, and a third and final wave of amiibo consisting of Rover, Kapp'n, Timmy and Tommy, and a variant of Isabelle wearing her summer outfit was released in 2016, making the final character roster have 16 characters for the Board Game mode.

Animal Crossing: amiibo Festival is the lowest-selling Animal Crossing game released outside of Japan. It received mixed to negative reviews from critics, who criticized its gameplay, arguing it did not justify its full price tag, and its complete dependency on amiibo functionality.

Only the Board Game is unlocked from the beginning. After the player completes two games in the Board Game mode, they will be able to unlock eight minigames using Happy Tickets. 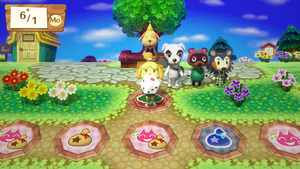 The Board Game mode

Between one and four players can play the Board Game mode, where participants compete to earn the most Happy Points. Prior to beginning a game, each player must tap in an amiibo on the GamePad, in order to select the character they will play as. Players that do not tap in will use a player as their avatar. After the initial game, which takes place in the current month, the players select a month to play, which determines the events that can occur during the game (such as Bunny Day and the Fishing Tourney).

A player's turn begins with a die roll to determine how many spaces they will advance. After moving forward, an event will occur, causing the player to gain or lose Happy Points or Bells; collecting 1,000 Bells earns a player an additional Happy Point. When the game ends, the player with the most Happy Points is declared the winner.

Certain characters from the Animal Crossing series such as Katie and Joan will make regular appearances on the board and interact with the participants of the game.

In addition to the primary Board Game mode, Animal Crossing: amiibo Festival includes a collection of minigames, which can be unlocked with Happy Tickets. All of the minigames require the use of amiibo cards. There are eight minigames in total: 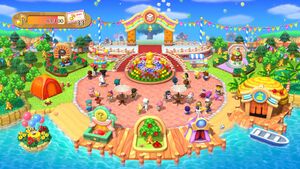 The plaza after everything has been unlocked 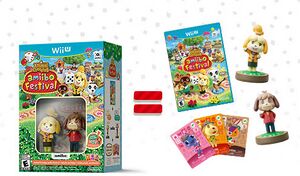 A promotional image showcasing the amiibo included in the bundle release

According to director Aya Kyogoku, Animal Crossing: amiibo Festival began development because "the team wanted to create Animal Crossing amiibo and needed a game to utilize them."[7]

Animal Crossing: amiibo Festival was announced during Nintendo's E3 2015 presentation on June 16, 2015, set for release in Q4 2015.[8] The final November release date was revealed in October 2015, one month before the game's release.[1]

The game was first released in North America on November 13, 2015, then later released in Europe on November 20, and in Japan and Australia on November 21. The game was exclusively released in a larger box that included amiibo figures for Isabelle and Digby and unique, Desert Island Escape-themed amiibo cards for Goldie, Rosie, and Stitches. A blurb on the box which denotes the Digby amiibo figure as a limited time offer suggests that a version with only the Isabelle figure was planned; however, such a version was never released, likely due to not enough stock selling of the initial print run.

Initial unveiling of the game in Nintendo's E3 2015 was overwhelmingly negatively received, with the video's like-to-dislike ratio skewing very heavily toward dislike (~3,000 likes as opposed to ~13,000 dislikes) while comments were disabled.[9]

Animal Crossing: amiibo Festival received generally unfavorable reviews from critics according to video game review aggregator Metacritic, on which the game received a score of 46 out of 100 from critics.[10] Critics frequently cited the unengaging gameplay, which they boil down to simply rolling dice and reading messages. Critics also noted the game as cynical ploy to purchase more amiibo, along with the game's hefty initial price of $60 (a full price game). Nintendo World Report gave the game a 4.5 out of 10, calling the game "boring" and "nothing more than a simple board game", along with stating that its content "lacks variety and fun".[11] IGN shared a similar sentiment, calling the game a "snooze fest" while giving it a score of 5 out of 10.[12] While criticized for its gameplay, amiibo Festival's visuals were generally praised by reviewers for their "Animal Crossing charm".