"Wow, it's nice to know there are still plenty of rude people in the world. Know what? I'm sitting here anyway!"
— Rover, Animal Crossing

Rover is a cat in the Animal Crossing series. His job varies in each game, but his primary job is to set up the playable character. His name likely comes from roving, meaning "to travel without a set destination," which reflects his role in the games.

Artwork of Rover from Doubutsu no Mori.

Rover is a blue and white cat with red irises and black vertical pupils in his eyes. He wears a yellow-lined sweater with a repeating red and black diamond pattern.

Rover likes talking to the player, whether they are rude or polite to him, while riding on trains or buses. 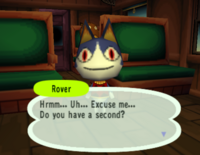 Rover talking to the player on the train in Animal Crossing.

Rover makes his debut in Doubutsu no Mori and Animal Crossing, serving to set up the game for the first time. In his first appearance, Rover meets the player on the train, when he approaches the player asking if he has the correct date and time, before asking if he can sit adjacent to them, promising that he isn't crazy. Regardless of whether the player rejects him or not, he will sit in the row across from the player and drums up conversation by asking questions to determine the gender and appearance, as well as asking where the player is going, and setting up a house for them to stay in by talking with his friend, Tom Nook. Soon after this, the train arrives at the player's town.

The player can also meet Rover again when traveling to another town, though he will not ask questions to the player. 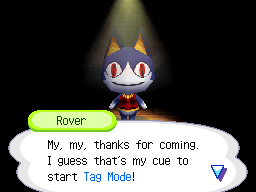 Rover makes a minor appearance in Animal Crossing: Wild World. He can occasionally be found drinking coffee at The Roost on any day from 12:00 PM to 1:30 PM and 2:30 PM to 4:00 PM. He also begins Tag Mode for the player, appearing when the player selects the option from the title screen. 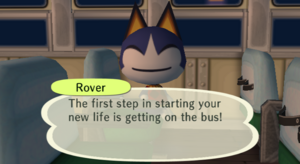 Rover talking to the player on the bus in Animal Crossing: City Folk.

In Animal Crossing: City Folk, Rover returns to his previous role from Animal Crossing, by setting up the player for the first time they play. He meets the player on the bus driven by Kapp'n and asks questions to determine the gender and town name of the player. Rover also appears whenever the game is booted up, asking if the time and date is correct and who is going to be playing the game out of four saved players, as well giving access to options.

Rover also turns on WiiConnect24, as well as other options, such as audio options, by calling him with the phone in the player's attic. 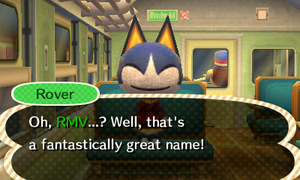 Rover talking to the player on the train in Animal Crossing: New Leaf.

In Animal Crossing: New Leaf, Rover yet again sets up the player similarly to previous games. He meets the player on the train before it pulls into town, similar to the original Animal Crossing. Yet, when the player starts the game thereafter, Isabelle greets them, not Rover. 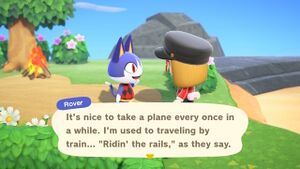 Rover talking to the player on the May Day Tour in Animal Crossing: New Horizons.

While initially absent from Animal Crossing: New Horizons, Rover was added in the 1.2.0 April Free Update alongside May Day, an event that runs from April 29 to May 7. He is invited by Tom Nook to celebrate May Day, and he can be found at the goal of the May Day Tour. If the player reaches him, he will congratulate them and give them a prize: Rover's briefcase or Rover's photo.

Rover's poster can be obtained from Nook Shopping after inviting Rover to Photopia via his amiibo.

Prior to its removal in version 2.0, when the player scans Rover's amiibo card and tries to invite him, he will say:

Hello! Player? Yeah, it's totally me! What's on your mind?
You have a campsite?! Sounds like fun! Too bad I'm busy right now on an island far, far away from yours.
Not that I can tell you what I'm up to. Mya ha ha! Till next we meet! Bye!

Rover appears in Animal Crossing: Happy Home Designer and is only available if his amiibo is scanned. In this game, it is hinted that he has a crush on Katrina.

In Animal Crossing: Pocket Camp, Rover will occasionally host a garden event, when the player can plant seasonal flowers and catch rare butterflies near them. For the captured butterflies, players will get rewards, including Rover-style furniture. Players can also share butterflies with other players.

Rover appears as a collectible sticker.

Rover appears as a trophy in both versions of the game. 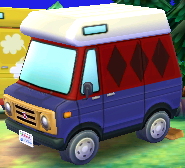 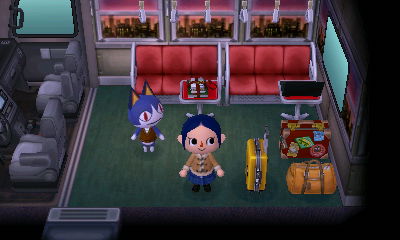 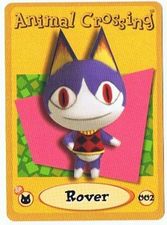 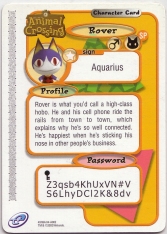 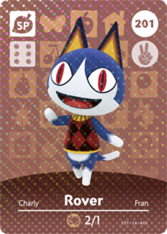 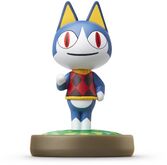 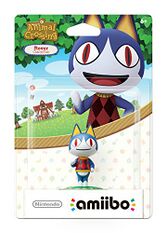